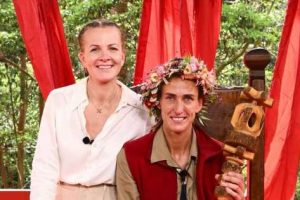 After three gruelling weeks in the I'm A Celeb jungle, Jill Scott was crowned queen of the jungle on Sunday- and fiancée Shelly Unitt couldn't be prouder.

The England Lioness, 35, who professed her love for Peter Andre while on the show, has been in a relationship with the community health officer, 37, who has been her biggest cheerleader, for six years.

The sweet couple regularly share loved-up snaps together on their social media pages – while Jill appears to have a close relationship with Shelly's two teenage daughters, Evie and Hattie.

And I'm A Celebrity viewers welled up at the letter Shelly sent the retired footballer while she was in camp.

It read: "Hi Jill it’s Shelly, I love you and miss you so much. There isn’t a minute that goes by where you’re not on my mind. I love you so much and now the rest of the world does too.

“This is because you’re such a great person with your positive, kind and encouraging self. I’ll have a flat white waiting for you, love your biggest fans, Shelly, Evie and Hattie.”

While little is known about how the couple got together, Shelly's sister is ex-Lioness Rachel Unitt, who has over 100 caps for England.

Rachel, 40, and Jill both played for Everton Ladies around the same time, with Jill leaving for Manchester City in 2013, so it's possible Jill met Shelly through her sister.

Shelly has always been supportive of her fiancée's sporting career and regularly shared snaps singing her praises.

She was a familiar face at matches, cheering her on with her daughters, and all three have England tops with Jill's name and number on.

Student Evie, 19, and Hattie, 14, both appear to have welcomed Jill into their family.

They're often snapped out having dinner together as a family, while Jill also posts photos of the girls on her social media, calling them "my team".

Before Evie headed off to university last year, Shelly shared a post joking she wasn't sure how Jill will cope without her stepdaughter's hair and make-up skills.

The couple announced their engagement in March 2020 – just before lockdown.

As well as putting a ring on it, the couple made things official by buying a café together called BoxxtoBoxx in Manchester, where they live in a stylish home decorated in white and grey.

The coffee shop, which opened in April last year, is often decorated with things to support Jill – most recently jungle attire and "Vote Jill" splashed across the windows.

It also has a permanent portrait of the footballer on the wall which has her signature on it.

Now Jill is Queen of the Jungle, lucrative endorsement and life-changing TV deals are expected to flood in – but finally getting married is likely to be high on their to do list.

A source told the Mirror: "Jill is being loved by the audience, as we hoped she would be. People are seeing the funny and courageous person that fans of women’s football already know and love.

“Her team has been bombarded with offers. She also has her coffee shop in Manchester and likes to work there, but she’ll struggle to fit in shifts with the amount of work on offer elsewhere.”