Holly Willoughby’s stylist has revealed she’s prepared a staggering 40 outfits for the presenter’s first stint on I’m a Celebrity.

Angie Smith, who has been working with the star for two years, described her look as ‘Jungle Jane meets Tank Girl at a rodeo’ as she lifted the lid on the secrets behind the star’s wardrobe.

Speaking to the Telegraph, Smith explained how the pair overcame the considerable ‘sartorial challenge’ of the humid and muddy filming location by preparing almost twice the 23 outfits required to see Holly through the series.

She told the newspaper: ‘We wanted the look to be fun but practical. Holly has to walk across bridges and run down hills to camp, so heels are out. The approach is very different to Holly’s This Morning wardrobe.’ 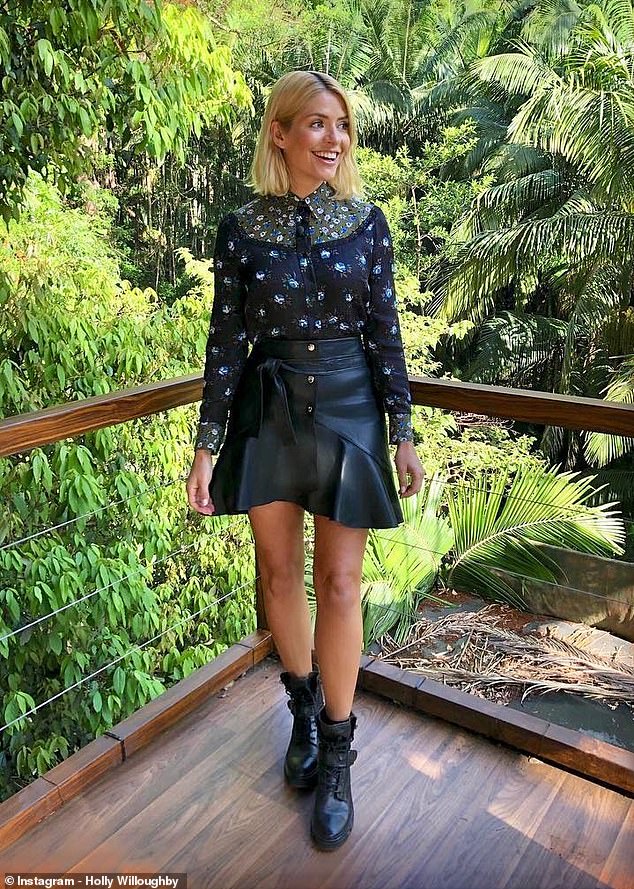 Holly Willougby’s stylist has lifted the lid on the secrets behind her jungle wardrobe. Holly opted for a Sandro shirt, Maje skirt and Topshop boots in the jungle last week (pictured) 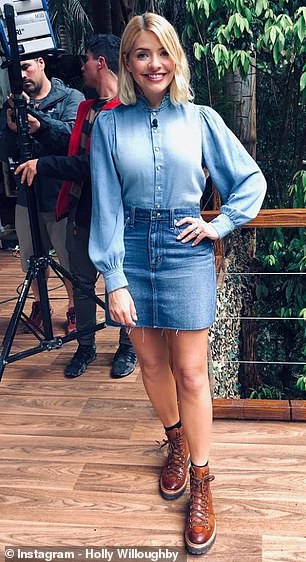 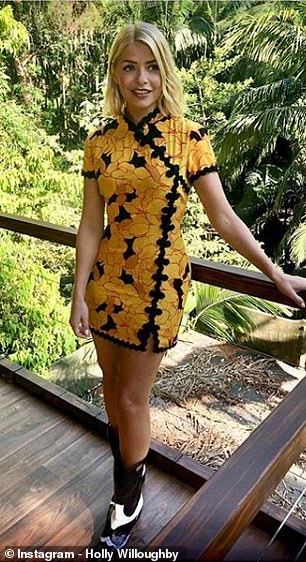 With the help of stylist Angie Smith, I’m a Celebrity star Holly wore clothing totalling almost £2,500 on last week’s episode of I’m A Celebrity, thanks to mix of designer clothing (left); and on Saturday she wore a De La Vali dress teamed with Ganni boots (right)

And underpinning the challenges posed by the Aussie climate, she added: ‘The weather is changeable and could be roasting one minute and raining the next. Also, throughout the course of a show the temperature rises.’

Mother-of-three Holly, 37, is standing in for Ant McPartlin for her first stint in the Australia jungle co-presenting alongside Declan Donnelly.

And the time difference – Australia is almost 12 hours ahead of the UK – means that Holly will often be shooting glamorous evening looks at 6.30am local time.

Smith, who always tucks in Holly’s shirts in order to ‘define’ her silhouette, said she had opted for ‘seasonless’ clothes from brands including Sandro and All Saints at a mid-market price point when putting together the star’s jungle wardrobe. 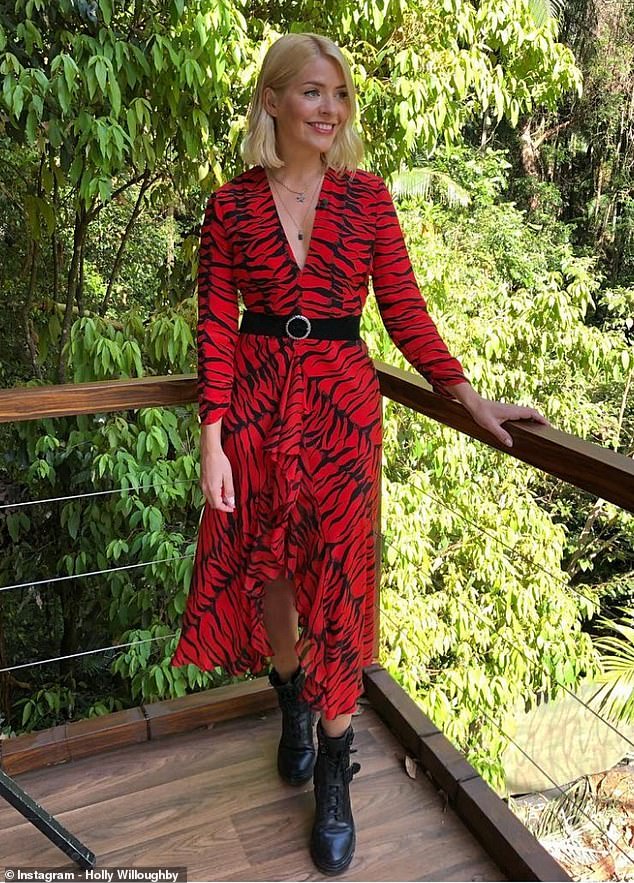 Holly in the jungle this weekend wearing a Rixo London dress, Topshop hiking boots and Kirstie le Marque jewellery. The time difference on set – Australia is almost 12 hours ahead of the UK – means that Holly will often be shooting glamorous evening looks at 6.30am local time 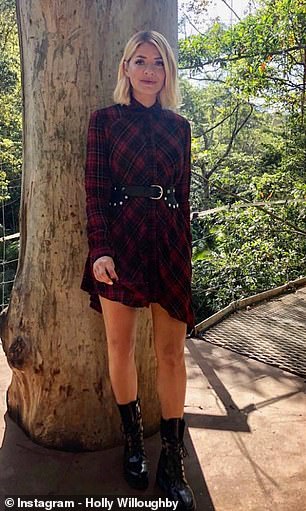 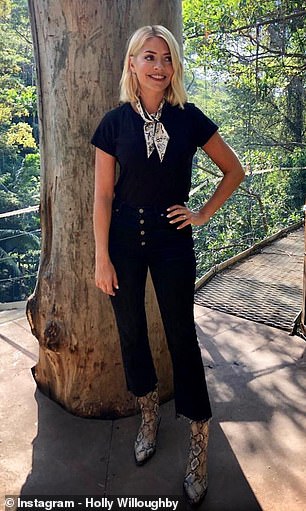 Holly wears an All Saints dress, Isabel Marant belt and Maje boots (left); and a Rag & Bone t-shirt, J.Crew jeans, Topshop boots and a Rixo London scarf (right). Holly is standing in for Ant McPartlin for her first stint in the Australia jungle co-presenting alongside Declan Donnelly 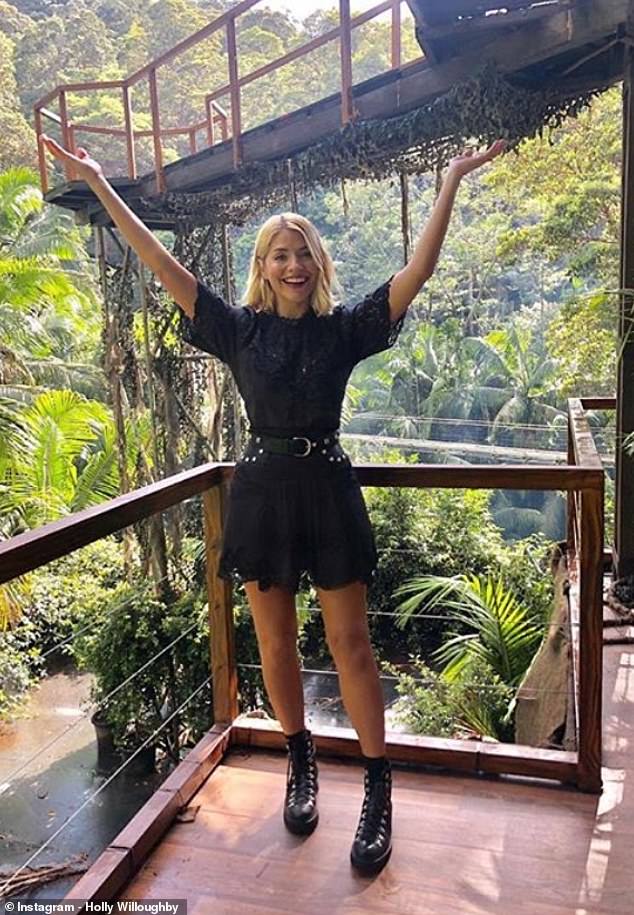 Last week the star wore Grenson lace-up hiking boots along with a top, skirt and belt from Harvey Nichols. Grenson confirmed Holly had helped send sales through the roof

And it seems their efforts are paying off, with Grenson footwear confirming that Holly’s endorsement of their Nanette hiking boots on the show helped them shift 400 pairs and counting.

Last week, Holly broke with her high street style when she wore an outfit totalling almost £2,500 including a designer anorak.

Mother-of-three Holly, who has been known to wear pieces from the likes of Miss Selfridge and Dorothy Perkins, wore top-to-toe designer, teaming her double denim ensemble with the £250 Grenson boots.

Her shirt, from trendy Parisian label Ba&sh, cost £165 while her Madewell skirt was a rather more purse-friendly £43.99.