Home » In Texas, We Are The Rescue Team

In Texas, We Are The Rescue Team 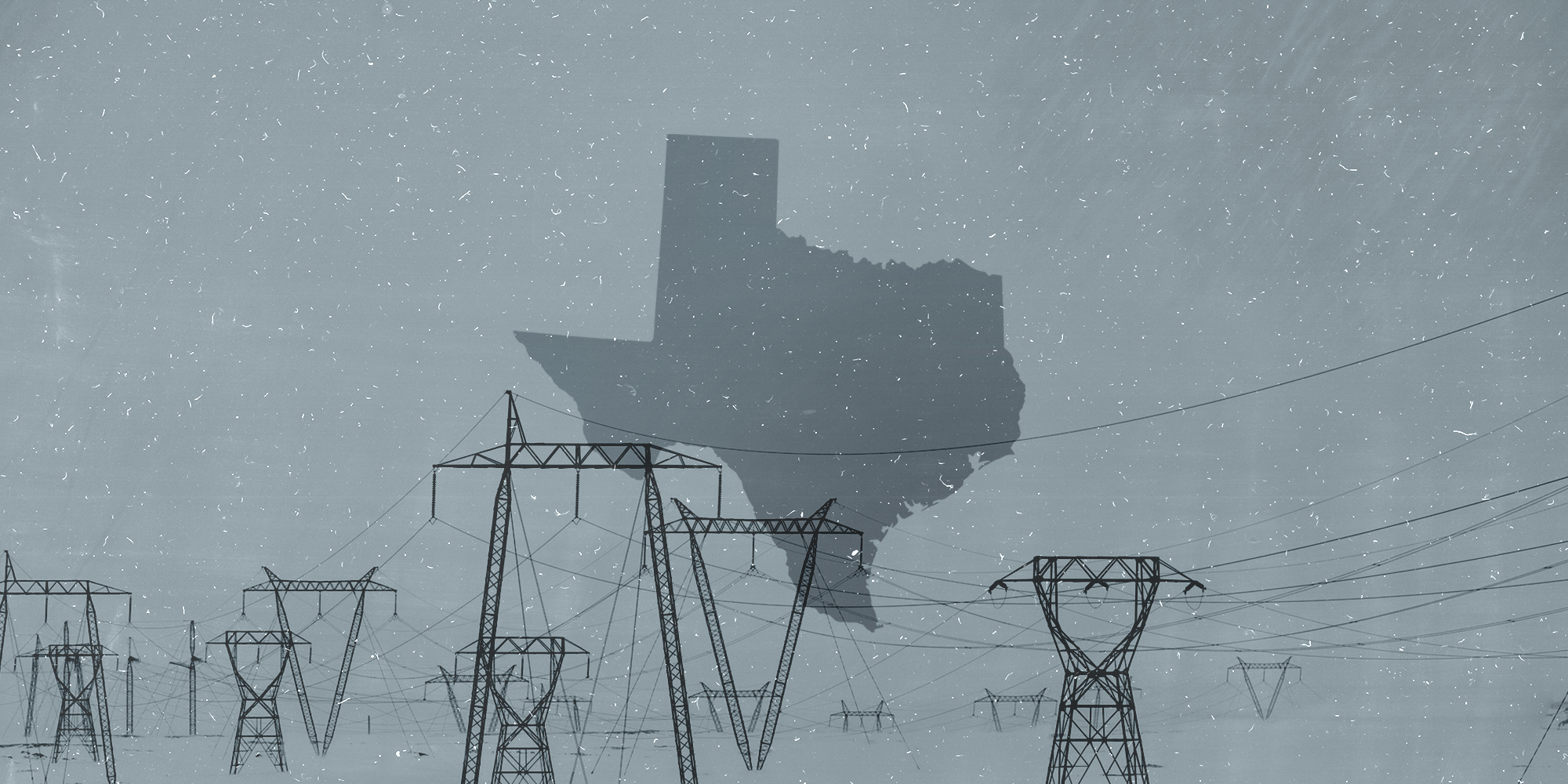 It’s nearly midnight in San Antonio, Texas, on Sunday, February 14. The temperature has plunged to 10 degrees, but my husband, Adrian, and I are not yet worrying about how we’ll keep our toddler and baby warm if the electrical grid fails, which it will within hours. We’re not thinking of the hill outside our neighborhood, which will become so dangerously ice-slicked it will effectively trap us in our home. We’re not taking stock of our meager food and water supply, calculating how long it will last us.

We’re laughing, racing from front door to back as snow falls in billowing sheets, making new what has been the same for a long pandemic year.

The next day, parents across the state fit their children with siblings’ too-big beanies and last year’s too-small mittens, taking photos of bright apple cheeks and smiles tipped up to the jewel-bright sky. Some of these children won’t be alive in three days, two, one.

The house is a body whose organs have shut down.

Texas, which produces more energy than any other state in the United States, relies on a free-market electrical grid, a deregulated system meant to lower energy costs for consumers, but which also isolates the state from the rest of the country’s power grid. And despite Texas enduring a similar winter storm in 2011, the Electric Reliability Council of Texas, or ERCOT, which manages nearly 90 percent of the state’s electrical grid, left “winterizing” power plants and wind turbines up to individual power companies.

Not surprisingly, the power companies didn’t undertake the costly upgrades, and when Texas plummeted to subfreezing temperatures early Monday morning, massive amounts of energy fell off the grid just as demand was sharply rising. Texas was “seconds and minutes away” from a total grid collapse when grid operators initiated what were intended to be rolling blackouts. Instead, more than four million Texans were left without power for days, as indoor temperatures dropped low enough to kill people in their homes or force them to make unthinkable decisions to keep warm.

By the time I finish putting our five-month-old to bed on Monday night, the power has been completely off for seven hours. The baby is wearing socks under a long-sleeved footed sleeper, topped with a fleece hoodie and brown sweatpants with teddy bear ears flapping at the knees, and then his puffy Merlin’s Magic Sleepsuit. As I rock him, the house is a body whose organs have shut down. Gone the heartbeat, the steady unnoticed whoosh of blood and oxygen through veins, warming the skin. Gone the shape of things in the darkness. I listen until the silence breaks: the push of freezing wind through leaky windows, an intruder we can slow but not stop.

I settle the baby in his crib, then use my phone’s flashlight—39 percent battery—to find my way to the living room. Four candles burn. Two headlamps, one weak flashlight. Adrian and our almost three-year-old daughter are on the couch in the center of the light.

“I’m scared of the dark,” she says, the first time I’ve heard her say it.

“Everything is the same in the dark as it is in the light,” I say, pulling her close. “We just can’t see it.” 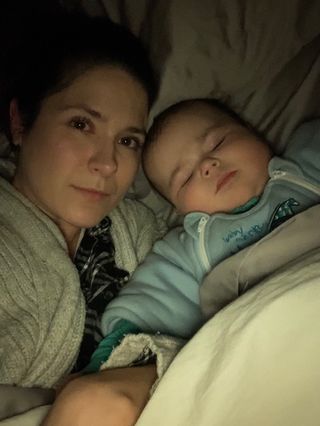 Tuesday, we light the gas stove and I hold our daughter near enough for warmth, not so near she can touch it. I’m wearing three pairs of socks, two pairs of pants, two shirts, a fleece hoodie, and my robe. The roads are unsalted snow and ice, cars piling up on the bottom of the hill outside our neighborhood.

“What are we going to do?” Adrian says quietly. “We have no food. It’s only going to get colder.”

Consumed by the demands of pandemic working-parenting, we’ve been living on takeout for longer than I’d like to admit. We’re out of fruit pouches for our daughter. There’s pasta but no sauce. Several boxes of cereal, half a gallon of milk. Six bottles of water, one bottle of wine, one coffee pod. Our Instacart order, originally scheduled for yesterday, is delayed until tomorrow, but who knows if it will make it. The extent of our helplessness, our unpreparedness, is overwhelming, clawing in my chest.

Adrian hesitates. “I think I should go to H-E-B.”

It’s almost noon, when the grocery store opens. The temperature is momentarily above freezing, but in a few hours, it’ll drop again, with subfreezing temperatures and more ice and snow forecast through the next two days. These are the choices we’re starting to make: my husband’s safety or enough food for our family. 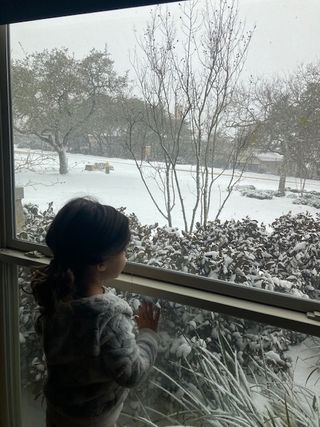 I build a tower with our daughter. We paint a picture. Adrian sends me photos and videos from H-E-B, a shivering line wrapping around the store. No fresh produce, no water, no milk, no eggs, and after a year of careful quarantining, no social distancing. I am frantic beneath my skin, terrified of the night to come. I nurse the baby and hold his little chapped pink fingers, and my shallow breathing deepens as heat transfers from my body to his and his hands warm in mine. I think, At least this is something I can do. Outside, I hear sirens.

“Are you scared?” my daughter asks on Wednesday. Tangled chestnut curls—fourth day now without a bath—fall into her eyes.

She tilts her head, smiles. “Say yes,” she prompts.

It’s daytime, but she twists the flashlight on, a pool of golden light at her feet. On one side of her, a rideable plastic bus. On the other, a blue rubber horse.

She grins. “Don’t be scared. We are the rescue team!”

I think, At least this is something I can do.

We’ve already decided we’ll risk driving to a friend’s house on Wednesday night if we don’t get power back even briefly. Temperatures are due to fall to 19 degrees, more snow predicted throughout the night and all day tomorrow. We’ve closed doors to conserve warmth and tucked clothing beneath window frames, using tape for the worst one in our bedroom. We’ve talked about sleeping the four of us to a bed, but I’m worried about suffocating the baby. We’ve talked about using the car to warm up, but that’s how a mother and her daughter just died in Houston.

All over Texas, people are struggling to survive. In Austin, Pixie Phoenix huddles in one room with her husband and their 11 year-old-daughter. Their only source of heat is a makeshift “furnace” using baking dishes, tea lights, and tinfoil. Phoenix, who has a broken back and bipolar disorder, is just grateful that she has all her prescriptions.

In Michelle Cullen’s apartment building, people are using downed trees and cardboard boxes scrounged from recycling to burn for heat. Cullen, who can see her breath in her apartment, has been running hot showers for steam, but when the water goes out, she knows her choice is stay and freeze to death or risk her life on icy roads to get to a hotel. After three hours of phone calls from Ohio, her sister finds her a room, and Cullen packs up.

In Massachusetts, Ursula Villarreal-Moura has stopped getting text updates from her aunt in Eagle Pass, who has been without power and water since Monday. When she calls the state for a welfare check, they find her aunt’s porch iced over, trapping her indoors with no way to charge her phone. Her aunt refuses to leave her cat behind.

In the Laredo area—my hometown, which was recently the worst in the country for COVID-19 cases per capita —about 33,000 accounts are without power and around 27,000 accounts without water. A warming center opens up, administering rapid COVID-19 tests at the door. Cots are placed six feet apart.

The poor, the sick, the elderly, the homeless, communities already ravaged by the pandemic: They are suffering the most. The true toll still unknown.

The extent of our helplessness, our unpreparedness, is overwhelming

The house takes a warm shuddering breath just as the sun lowers that night. We whoop and cheer. Even an hour of heat can get us through the night. And we do. We get through another night.

We wake up warm on Thursday. The power is still on. But now, we have no running water. Four bottles of water are all we have left. Snow has been falling throughout the night and relentlessly throughout the day. We boil some to drink, but it’s cloudy, with brown flecks, so we use it to flush toilets instead. We’re all now five days without bathing. Our daughter has a diaper rash. Dishes pile up, crusted and rancid. Four bottles of water are now three, now two. The baby is nursing all the time. I’m worried I’m too dehydrated to make enough milk.

That afternoon, our friends, who live two minutes away and whom we haven’t seen for more than a year because of the pandemic, brave the roads to bring us five gallons of water from their bathtub. They meet our baby for the first time. It’s an unexpected shot of joy, straight to the veins.

“We are the rescue team,” my daughter said, and it’s true. No one is sweeping in to save the day. It’s our friends, our neighbors, our businesses, our community organizers who are risking themselves to help others.

And we are luckier than so many. By Friday, our water is back. Our house has weathered the storm. We have survived where others—whose power never sputtered back on for an hour here and there, or whose homes were less insulated, or who were forced into frightening decisions before we were, or, or, or—did not.

The children’s deaths haunt me. Three children and their grandmother die in a house fire, their mother the sole survivor. An 11-year-old boy freezes to death beneath blankets inside his family’s mobile home. These children, our children, their satin skin and rabbit hearts and brilliant nonsense questions, all their snow-bright futures, dying by fire, by gas, by cold, because our state—this state that produces more energy than anywhere in the country; this state that prizes independence over cooperation; this state whose leaders are blaming wind turbines, the Green New Deal, each other; whose leaders are flying to Cancun with their children while their constituents’ children die—this state has failed our children, who trust us to protect them.

And we are elemental, humans caught in a wilderness for which we were unprepared. When our house lost power, we lost the illusion of our own. We lost the illusion that the larger scaffolding would hold and that if it fell, we wouldn’t be left wishing we could strip off our own skin to keep our children warm. We were the rescue team, and we could not save everybody, and we shouldn’t have had to try.