Home » Lifestyle » In the Shadow of May 1968, French Film Industry Stands at Crossroads With Box Office in Crisis

In the Shadow of May 1968, French Film Industry Stands at Crossroads With Box Office in Crisis 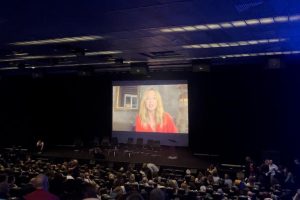 Grappling with free-falling theatrical admissions and misplaced blame by exhibitors on so-called “auteur” movies, the leading lights of the French film industry sounded the alarm about the state of the country’s cinema sector during a dramatic and emotional conference.

The conference was held at the Institut du Monde Arabe, a cultural venue headed by Jack Lang, who served as minister of culture throughout the 1980s. More than 400 people attended the event, including members of the independent distributors guild (DIRE) and the directors guild SRF, the governing body of Cannes’ Directors’ Fortnight.

Filmmakers, producers, distributors, arthouse exhibitors and crew members took the stage to urge the French government to take concrete steps to protect the industry’s unique financing and distribution model at a time when the profitability of local movies is being disputed and reforms are looming.

The president of the National Film Board (CNC), Dominique Boutonnat — who is facing trial for alleged sexual assault — and culture minister, Rima Abdul Malak, were invited to the event but didn’t turn up.

The bulk of speakers, including filmmakers Agnes Jaoui, Lucas Belvaux, Clément Schneider and producers Ben Saïd and Levy spoke about the ideological shift taking place in the film industry, as well as other segments of French society. A wind of “neo-liberalism,” they argued, has emerged with the arrival of global streamers in France, and has fueled the fierce consolidation of the market.

Although merger plans between TF1 and M6, France’s leading commercial networks, were abandoned due to anti-trust challenges, many independent players still fear that they’ll be wiped out or lose their bargaining power unless they join a bigger group.

Others feel that the streamers have domesticated them, turning them into guns for hire with no back-end benefits.

“The good news is that the world people has never been craving for stories more, the bad news is that we’ve never been treated so poorly,” Jaoui said, referring to demands from platforms to “write and direct in the most normalized way, as fast as possible, and report to 40 people.”

Alluding to the increasing power of streamers on the French industry, Jaoui said “streamers are on track to achieve what American cinema hasn’t in 100 years and are doing with our consent.”

“While we were locked up at home, and theaters were closed, we learned that the only way to escape and the least toxic drug looked like a giant red N,” said Jaoui, referring to Netflix, which now boasts 10 million subscribers in France. The director also said she was worried for French broadcasters’ resources now that the French government has scrapped the license fee, which financed a bulk of their budgets. The good health of broadcasters matters to French cinema because local TV channels have to invest a percentage of their annual revenues in French and European content, including movies.

Carcassone made a moving speech in which he pretended to be in dialogue with his mother who wondered if he was “making art or money.” The producer, whose notable credits include Zeller’s Oscar-winning film “The Father,” said profit should not be the only driver in creating art. Levy, meanwhile, said the industry was increasingly being led by a powerful minority of billionaires.

Levy said it was the big exhibition chains that profited the most from the rescue subsidies instated by the CNC during the pandemic, and yet “they are the ones who now claim they want to show some e-sport events instead of our films.” The French box office is currently down 28.7% on 2019 and theatrical admissions reached a low point in September — a 42-year record low (save for 2020 when cinemas were shuttered for many months).

Elisabeth Perez, a producer, said the CNC is planning to give distributors €4 million in subsidies but she argued that it’s “only a fraction of what exhibitors have received and isn’t enough to help distributors rise up from the tsunami that just hit them in the face.”

The recent exhibition congress, which was held in Deauville last month, saw several exhibitors of multiplexes complain about the quality of French arthouse films, saying there were too many mediocre films and blaming them for the drop in admissions. Alluding to that polemic, Gregory Gajos, a distribution executive at Ad Vitam, a leading arthouse distribution banner, made a speech suggesting the drop in admissions was most likely due to the “massive launches of streamers, disappearance of American films in cinemas and drain of talent towards platforms.”

He said “no other country welcomes such a flurry of diverse movies,” and cited some of France’s many filmmakers who have emerged and thrived, from Alice Diop (“Saint-Omer”) who won the Golden Lion and Lion of the Future at Venice, and Rebecca Zlotowski, whose latest film “Other People’s Children,” which also competed at Venice, is performing well in theaters. In fact, many of the best-performing films right now are arthouse films that played at festivals, alongside Zlotowski’s film, Alice Winocour’s “Revoir Paris” and Emmanuel Mouret’s “Chronique d’une liaison passagere.”

Financing, however, remains a major source of concern — an issue that largely boils down to France’s strict windowing rules.

Unlike in most other countries where windowing is a contractual issue, in France it’s regulated by a decree that sets exclusive windows for each distribution platform, kicking off with theaters, pay-TV and transactional VOD and free-to-air channels, as well as SVOD. Each platform has specific investment obligations tied to its exclusive window, notably Canal+, which has committed $680 million in French and European films through 2024 to benefit from access to fresh films six months after their release. Streamers, meanwhile, had their windows set at 15 or 17 months (compared with 36 months previously) but that didn’t sit well with them, especially Disney+, which decided to forgo the French theatrical release of “Strange World” next month, sending exhibitors into a state of panic. Windowing rules are now up for re-negotiation and many exhibitors, distributors and producers fear a complete revamp will weaken their films’ access to theaters and financing resources.

Virginie Efira, a Belgium-born actor who has become one of France’s biggest stars, could not attend the conference but recorded a speech on video in which she applauded the breadth of theaters (5,241 screens) and diversity of movies playing in France. “When I came to France, I had never seen so many cinemas, big and small ones, arthouse venues where you can see all kinds of movies, from mainstream entertainment to more personal or daring films,” said Efira, who stars in Zlotowski’s and Winocour’s films. “These are the movies that help us see bigger, live, understand.”

Throughout the day, many participants drew parallels between now and 1968, when the country experienced massive civic and political unrest that gave birth to a cultural revolution. In the spring of 1968, New Wave filmmakers such as Jean-Luc Godard and François Truffaut led demonstrations that brought down the Cannes Film Festival and spearheaded a vast conference, also called Etats Generaux du Cinema, to “fight against the existing economic, social and ideological order belonging to capitalism that the state is protecting.” Levy said today’s conference was like a “tribute to Godard,” who once said said “we’re alive because we continue to think.”

For Jaoui, the crux of the battle today “is not to hold on to an aristocracy of cinema and hang on to our privileges. It’s a matter of not destroying the only thing that matters in French cinema: the freedom of the creator.”