Inmates set fires, cause flooding and break out windows at St. Louis jail 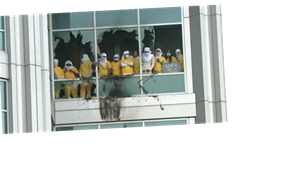 Inmates at a St. Louis jail set fires, caused flooding, broke out fourth-floor windows and tossed a stationary bike, chairs, mattresses and other things outside Saturday in the latest disturbance over concerns about the coronavirus pandemic and restrictions that have limited visits and stalled court proceedings, officials said.

Dozens of law enforcement officers worked for hours before bringing the riot at the St. Louis City Justice Center under control shortly before 10 a.m., a spokesman for Mayor Lyda Krewson, Jacob Long, said. About 115 inmates were involved, said Long, who described the group as “extremely violent and noncompliant” in an interview with The Associated Press.

One corrections officer was attacked and treated at a hospital for his injuries before being released, Long said. No detainees were hurt, he said.

Video posted on social media by passersby showed inmates standing near three windows on the fourth floor that had been smashed out. Some carried signs or tossed items, some ablaze, to the sidewalk below. Firefighters used a hose to put out the fires. 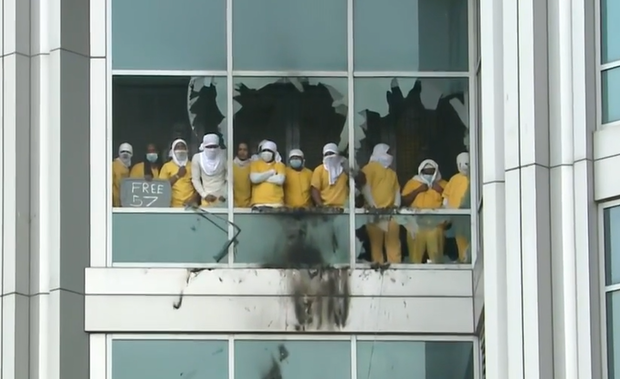 Long didn’t have a cost estimate for the damage but described it as “fairly extensive.”

“There are some burn marks on the front of the building. They destroyed the inside of their floor and threw all sorts of stuff outside. … They flooded the floors, clogged the toilets, clogged the drains, so there is water damage,” Long said.

Long said 65 inmates were transferred from the downtown jail and into the St. Louis Medium Security Institution, also known as the workhouse. He also said that law enforcement has talked to the prosecutor’s office and that the potential exists that some of those involved could face additional charges.

In late December and early January, dozens of inmates were transferred from the St. Louis City Justice Center after two separate disturbances. Officials have said inmates were upset about conditions in the jail amid the pandemic.

Although there were no confirmed cases of COVID-19 among the 633 people jailed at the St. Louis Justice Center as of Friday, tensions have been simmering.

“I imagine they are under the same amount of stress due to COVID restrictions like the rest of us are,” Long said. “Courts haven’t been hearing cases in the 22nd Judicial Circuit. Their family visits have been restricted. But also they are acting out and that is the current situation.”

Activists have protested conditions at the workhouse for years, but plans to close it have stalled, with backers of keeping it open saying it provides a way to space out inmates amid the pandemic.

“These events demonstrate the need to have two facilities at this time,” Long said.