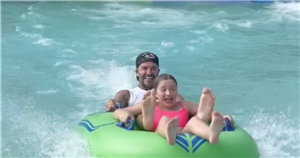 David and Victoria Beckham have given a glimpse inside their sun-soaked day at a waterpark in Miami with their daughter Harper.

The former professional footballer, 46, and fashion designer, 47, who share children Brooklyn, 22, Romeo, 18, Cruz, 16, and 10 year old daughter Harper Seven together, enjoyed a day at Tidal Cove, Miami, with their youngest.

David and his daughter took to the Master Blaster, the world's first uphill waterslide, and the dad-of-four shared footage to his 68.2million Instagram followers of the pair plummeting down the slide and into the pool.

Captioning the footage, he penned: "Yes that’s my daughter screaming not me I promise Harper Seven so much fun love you."

However, former Spice Girl Victoria was quick to point out that the 'screaming' was in fact from her husband David as she commented: "U screamed all the way down David!! You can’t help yourself at the water park!"

Meanwhile Victoria shared a collection of sweet snaps with her daughter to her 29million followers as the pair relaxed in the pool.

The mum-of-four looked fresh-faced with her brunette locks in a clip as she put her arm around Harper who beamed at the camera.

It comes after the famous family gave a look into their dreamy stay on a yacht on the Amalfi Coast, Italy, in July.

Cruz shared an insight into their luxurious trip and could be seen posing on a water ring with little sister Harper.

The family also enjoyed various activities in the water, including a turn on a jet ski and Cruz was seen jumping off the side of the boat and into the water.

Meanwhile David was quizzed by police for 45 minutes after his two youngest children jet-skied on the Amalfi Coast, it was reported.

According to The Sun, a police boat pulled up alongside David's yacht, where he was sunbathing, and had a friendly chat with the retired footballer.

A witness told the publication: "The kids are quite young. You are meant to be 18 to jet-ski in Italy.

They continued: "David was sun-bathing and he immediately left the deck and went downstairs to deal with it.

"Both Cruz and Harper were wearing life-jackets and staying very near the yacht so it is hard to see what the problem was.

"David seemed to call to them to come back to the yacht, and they anchored the jet-ski.

"The questioning by the police went on for about 45 minutes although it all looked quite amicable.

"At one point, they asked for documents which David showed them.”