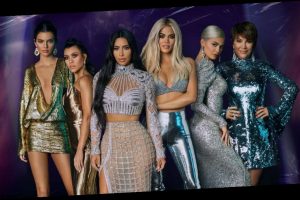 Kim Kardashian has admitted she’s “sobbing” as she gave fans a behind-the-scenes glimpse of the filming for the final scenes of Keeping Up With The Kardashians.

Yes, the day finally came for the Kar-Jenner family as they said “that’s a wrap” on their iconic reality show which has kept us entertained since 2007.

Taking to social media, the Instagram famous family shared snippets of the final day, all evidently feeling the sadness which comes with the end of a show.

Get exclusive celebrity stories and fabulous photoshoots straight to your inbox with OK's daily newsletter. You can sign up at the top of the page

Kim, who has reportedly hired a lawyer to divorce her husband Kanye West, posted a clip of an audio technician and revealed it was the “last day of filming” on her Instagram story.

The clip shows the technician, Erin, waving at the camera as Kim says: “This is Erin Paxton. This is our last Keeping Up With The Kardashians mining of life.”

She then moves the camera to show the individual microphones with each of the Kardashian sister’s names on as she adds: “Look.”

While Erin can be heard saying: “I’m gonna cry” as Kim says: “Don’t cry, don’t cry. You guys, it’s the last mining ever.”

Kim also wrote on top of the footage: “Last filming day of Keeping Up with The Kardashian’s EVER. Erin’s been out audio tech for 14 years!!” [sic]

The 40 year old also appears in a video on the show's Instagram, captioned: "20 Seasons. 14 years. Bible, we can’t believe today is the last day of filming for #KUWTK. Final season coming soon to E!"

Youngest of the clan, Kylie, also took to social media to give her 208 million followers the inside scoop.

Wearing a sensational cream outfit and her red locks in a long plait, the star penned as a caption: “last day of filming,” with a sad eye emoji attached.

Kourtney also shared her sadness at filming ending, holding up a glass of Champagne and writing: “officially sobbing. grateful for ever single second.”

Khloe took a video of the long table adorned with flowers while filming Saint West, Kim’s youngest, as he sat eating a biscuit.

Inside the Kardashian's houses

From Khloe’s video it seems all of the Kar-Jenner children were involved in filming, with Penelope and Dream spotted too.

Khloe also shared a snap of her coffee cup which had ‘happy last day’ written all over it. The star shared a snap of the last day while posing with True and Dream, and she looked a vision in a brown bandeau top with her short brown locks at her shoulders.

Kim also shared a video of a long table decorated with a huge flower garland in the middle.

And, on each place setting sits a cookie which has been decorated with each of the Kardashian clan’s faces on.

As Keeping Up With The Kardashians star Kim filmed the lengthy table, she explained: “Look at our lunch, this is our place settings so we know where to sit.”

The Kardashians were also surprised with a visit from treat restaurant Beignet Box’s truck.

As Kim, whose former nanny claims Kanye West's wild behaviour 'tore their marriage apart', filmed the food truck, she said: “Look who showed up for our last day of filming Keeping Up with the Kardashians.”

Kim panned the camera to a painting of the old Kardashian home and explained: “The first house that we ever filmed at, how sweet!”