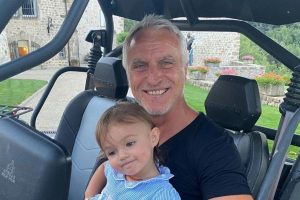 The countdown to I'm A Celebrity… Get Me Out Of Here! 2021 is well and truly on.

Amongst the stars set to appear on the hit ITV show is football legend David Ginola.

The 54 year old will have his model girlfriend cheering him on at home, who is 22 years his junior.

The footballer split from his wife of 25 years, who was also a model, and moved on with French model Maeva Denat.

With his former wife, David shares two children, a son and a daughter named Andrea and Carla.

His daughter is a fashion blogger, while his son has followed in his footsteps and gone into the sporting world as a football agent.

Andrea can be found posting on Instagram to his 1,900 followers.

He details that he lives in Paris and can be found playing a great deal of golf – a sport he coaches.

Meanwhile Carla has amassed an impressive Instagram following of 435,000.

She often posts wardrobe inspiration and snaps of herself out and about with friends.

Black Friday 2021: The best fashion discounts to get your hands on this year

David lived in St Tropez with his former wife and they were often spotted at star-studded events, living a luxurious lifestyle.

Yet in 2009 it emerged that David had admitted to an affair with Joelle Pinquier, but has denied fathering her daughter, the now-29 year old Joy.

It was revealed that David could be facing jail over unpaid child maintenance payments over a child he allegedly fathered during an affair between 1991 and 1992.

The two met and had a relationship while the footballing legend was married to ex-wife Coraline Ginola,

Speaking to The Sun, Joelle said: “My daughter Joy is now 29 and manages her own life. Talking about her biological father, David Ginola, who is cowardly and irresponsible, does not interest me.”

There have been claims that David also cheated on Coraline with his current partner Maeva Denat. The pair welcomed a daughter in 2018.

David often shares sweet photos of himself and his young daughter on Instagram.

Speaking about the announcement of David and Maeva’s relationship back in 2016, David’s son predicted that it “wouldn’t last”.

He told Mail Online at the time: “I doubt it will last. She just happened to be in the right place at the right time.

“The question I keep asking myself is if my dad were a baker living in the North of France and earning 1,500 euros a month would she still want to be with him?

"She is not the next Angelina Jolie. I want my dad to find someone who has goals in life.”

For more I'm A Celebrity and showbiz news, sign up to OK!'s daily newsletter here