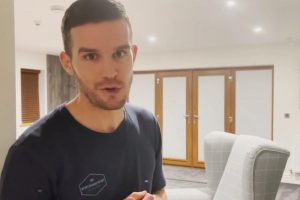 Gaz Beadle has given a glimpse inside his 'man cave' with a plush seven-seater cinema and golf simulator at his amazing new home.

The former Geordie Shore star, 33, who shares Chester, three, and Primrose, two, with wife Emma Beadle-McVey, gave a sneak peek inside the incredible room at the new sprawling home.

Introducing the space to his 21,700 YouTube subscribers, Gaz said: "It is one of my favourite rooms in the house. It is a room that I never in a million years, I think me or Emma imagined we would ever own a room like this."

The ex-reality star has a split the huge room into a cinema and chill out and gaming zone to make the most of the space.

Taking a look inside the cinema room, Gaz showed a peek of the high-tech light switches with 'bright' or 'relax' settings along with 'Amazon', 'Netflix' or 'Sky Q' to select the perfect film.

Meanwhile the space has a cool surround sound system with air-con to offer the perfect chill out space in the summer months.

Elsewhere Gaz gave a glimpse inside his own 'man cave' and revealed: "I am absolutely buzzing how this room turned out and, for me, it is definitely the best room in the house.

Gaz has his own TV screen in the room with a sofa, armchair along with signed football shirts on the walls and a bar area to entertain friends.

The dad of two shared a look of his gaming desk which is equipped with screens, headphones and microphones along with a huge golf simulator.

Gaz has his golf clubs at the side of the green along with a set for three year old Chester to practise his swing in the comfort of their home.

The doting dad revealed that the ceiling had been made higher for the golf simulator which measures three metres high by four metres wide.

Meanwhile fans were in awe of the stunning space and took to the comments to share their opinion.

One penned: "You guys are family and house goals."

"Love your man cave you're very lucky," another added.