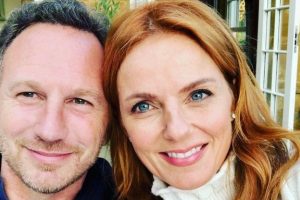 While many celebrities opt for city life, Geri Horner has chosen to live in a country home situated in a small town called Branbury in Oxfordshire.

The couple, who have been married since 2014, also have plenty of animals roaming the grounds. Let’s take a closer look inside…

A “Love is all you need” sign hangs in the kitchen of the family home.

Monty has his own space in the house with a miniature table and chair set and plenty of toys to keep him entertained.

This bookcase filled with classic hardbacks is a great feature and makes Geri – posing with a feathered friend she found injured and took to the vet.

The French doors mean her grand piano benefits from plenty of natural light in its spot looking out on to the beautifully maintained garden.

A fluffy white beanbag provides the perfect spot for Geri to work on her music.

Geri is a yoga enthusiast and it looks as though her moggie likes to join in with a cat pose. With dogs, chickens, donkeys and goats roaming around her property too, there is plenty more help at hand for all those animal-themed positions.

She describes the garden room as her “place of peace” – its grey panelled walls and vintage-style table make it the ideal location for relaxing.

Geri has plenty of room for pets at her home. We’re sure her beloved animals enjoy exploring the pretty garden.

Geri is a keen baker and spends lots of time whipping up delicious creations in her spacious kitchen, which has a classy neutral colour scheme.

The wicker chairs and striped cushions bring the outdoors inside – while Geri’s wellies add to the country aesthetic.

There’s plenty of space for Monty in Geri’s cosy-looking king-size bed, while the wall features bold splashes of colour.