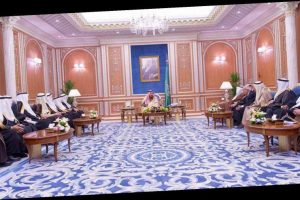 King Salman’s $1.5 trillion empire is more significant than one can think. If there is a royal family that is even richer than the British royal family, it is this Saudi Arabian monarch. This wealthiest royal family is known to hold an empire with a value of about $1.5 trillion.

The Saudi Arabian royal family might have a strength of about 15,000, but only 2000 members own most of the wealth. These core members form the ‘House Of Saud.’ The riches started developing as part of this empire back in 1700, and the founder of this ‘House Of Saud’ was King Abdulaziz bin Saud. While some may see them as controversial, given some headlines, the philanthropy displayed by the House is quite extensive.

The primary source of income in the empire is oil production. The royal family controls the state-owned oil company called Saudi Aramco. They are the second-largest reserve for crude oil and the largest producer of daily oil. This is how Saud’s House came to be the wealthiest empire globally, even more affluent than the British royalty, which is worth about $88 billion.

The ownership of this empire’s finest assets belongs to King Salman bin Abdul Aziz Al-Saud, his heir and the Crown Prince, Mohammad bin Salman, and his nephew Prince Alwaleed bin Talal. The following is a peek into his humongous empire.

The Extravagant Palaces of the King of Saudi Arabia

The royal family of Saudi Arabia tries to keep information about their assets private. However, King Salman is known to own at least four extravagant palatial estates. One of his palaces is the Murabba Palace which has 32 rooms and about seven courtyards. It is currently not a residential property but a historic building as the king resides in another exquisite palace.

This second palace he owns is called the Al Yamama Palace. This palace’s architecture and area make it more stunning than the previous one. It has about 400 rooms. Riyadh’s palace is also the royal headquarters, with rooms that have beautiful chandeliers and golden decorations and is remarkable for their eight marble floors.

King Salman owns another lavish estate known as the Erga Palace. This palace is known for its stunning mosaic floors and unique carvings on its high ceilings and massive walls.

The Exclusive Superyacht, Chateau, And Artwork Of The Crown Prince

The crown prince is no less abundant than his father, the king. Prince Mohammad bin Salman owns a $300 million chateau in France which is comparable to the royal households of the king himself. It has been called one of the most expensive homes in the world. It is French style but also very modern with tennis and squash courts.

The garden courtyard extends for about 50 acres of land. It has moats filled with fountains that can be made to look colorful with its lighting. It has deluxe jacuzzies and a large infinity pool. There are at least ten bedrooms, and each one is vast, with about 50,000 square feet. The mansion’s nightclub, sound system, and wine cellar provide one of a kind experience to the prince’s guests.

RELATED: Inside Russian Billionaire’s $100 Million Yacht That Can Break Through Ice

The heir to the House of Saud’s throne also owns a superyacht called Serene, which is considered one of the most expensive yachts worldwide. It costs about $500 million, and it can accommodate up to 24 guests and about 52 crew members. It has a jacuzzi so that the prince and his guests can have a relaxing time while on a cruise. Also, it has a helicopter hanger and two helipads so that the prince can fly anytime he needs to.

The crown prince is also an art admirer. He is known to own the painting Salvator Mundi by Leonardo da Vinci. The prince bought this for an estimated $450 million in a secret auction. However, a thing like this couldn’t stay concealed for too long.

A Plethora Of Exquisite Properties Of Prince Alwaleed bin Talal

Prince Alwaleed bin Talal might be the nephew of the king of Saudi Arabia, but his accumulated wealth is even more than the crown prince. The king’s nephew is more interested in real estate and hotels than in owning palaces. He is known to hold the most expensive hotels worldwide, including The Four Seasons, Monaco’s Monte Carlo Grand Hotel, a luxury hotel in Seychelles, and the Savoy Hotel in London.

But wait…there’s more. He also owns about three palatial properties in Saudi Arabia. One of these properties is the Kingdom palace which has a worth of about $130 million. There’s a Kingdom Resort and a coveted private jet, the Boeing 747-400 in his collection as well. Besides owning jewelry that is both stunning and massive, he also owns bejeweled cars.

Source: How to Spend It, Mr. Luxury, CNBC