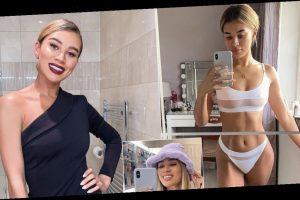 Montana Brown has achieved huge success since starring in Love Island, becoming a popular on social influencer as she documents her fitness journey and glamorous lifestyle.

As well as stylish outfit posts and envy-inducing bikini snaps, Montana, 24, often shares an insight into her London home which she lives in by herself.

The newly single star favours posing in her enormous mirrors perfect for capturing her favourite selfies, has a glam station dedicated to her make-up and a stunning walk-in shower.

Until recently it's believed the reality star was loved-up with her model boyfriend Elliott Reeder, but have since split, however plenty of pictures of the couple still litter her Instagram feed.

Alongside those are many smiling selfies of the Love Islander who has since gone on to do presenting stints on This Morning and Lorraine.

Montana gets ready at her glam station and has recently started filming video tutorials of her make-up looks for her followers.

With shelves of products, Montana makes sure to share what her favourites are so that others can try and achieve her style.

The beauty tends to take full advantage of the lighting in her bathroom posting snaps from the mirror in front of the walk-in shower.

She also loves to share photos of her abs which she's worked hard for, posing in front of her bedroom mirror where she has opted for the celebrity favourite style of crushed velvet.

And when she's not getting glammed up for a red carpet showbiz event, Montana is most likely seen in her kitchen whipping up a healthy treat.

One post shows Montana, who hails from Hertfordshire, posing in her underwear as she laughs in the state-of-the-art room.

And if she can't make it to the gym Montana makes the most of her back garden by doing at-home workouts in her sports gear.

Montana has spoken previously about achieving her lithe figure saying: "Just incase people thought I woke up with abs…. I used to eat microwave meals, eat lots of processed food and eat about 3 packets of salt and vinegar McCoy’s everyday at uni alongside lots of carbs, bagels, paninis, cookies and anything else that tasted lush ….

"Eating the right foods and going to the gym are how I achieve my body."

Montana paid tribute to her close friend Mike Thalassitis this weekend on what would have been his birthday.

Mike, who appeared on the same series of Love Island as Montana, died in March last year at the age of 26.

Montana was open with her struggle following his tragic death and revealed that she was seeking counselling to deal with the abuse from online trolls.

She shared an emotional message to her late friend which read: “Happy birthday angel face, miss you so much and i hope you’re having a party party up there wherever you are. I wish we all had more time with you. We lost you too early”. [sic]

END_OF_DOCUMENT_TOKEN_TO_BE_REPLACED

END_OF_DOCUMENT_TOKEN_TO_BE_REPLACED
We and our partners use cookies on this site to improve our service, perform analytics, personalize advertising, measure advertising performance, and remember website preferences.Ok