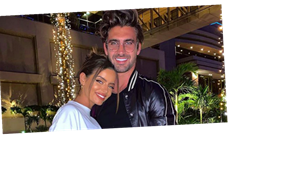 Maura Higgins is sure to have made her new boyfriend Chris Taylor melt after throwing him a very romantic date night during the national lockdown.

With restaurants and nightclubs closed during the third lockdown, couples are being forced to get creative when it comes to date nights, and Love Island’s Maura did just that.

The TV star, who went public with her new beau late last year during a trip to Dubai, took to social media to show off the incredible night in.

Complete with snacks, candles and a massive projector screen, Maura revealed that she had thrown Harry Potter-obsessed Chris a very special date night, despite not seeing the film herself.

Tucking into his favourite meal of fajitas, Maura and Chris later cuddled up on a pile of pillows to watch the films set up in the living room.

Maura wrote alongside snaps of the incredible night: “Today I planned date night. Thank you to the amazing @inaraeventss for all the help.

It comes after the pair teased plans to get married just months after going public with their new romance.

Maura, 30, took to her Instagram stories with her 28 year old beau Chris to shed some light on their relationship.

As one fan asked the couple on when they plan to get married Maura put the question to Chris who said: “Oh, next year?”

Maura then said: “That’s ages!” And Chris then compromised as he said: “Alright, this year” causing Irish brunette Maura to smile and giggle. Maura and Chris first confirmed their romance as they shared a loved-up photo of them coming up in Dubai in November.

As Maura posted the photo, she gushed over her new boyfriend in the caption.

Irish beauty Maura wrote beside the image: “He’s mine” followed by a read hear emoji.

Meanwhile, as Chris posed the matching snap on his own Instagram, he wrote: “Turns out I fell in love with my best mate”.