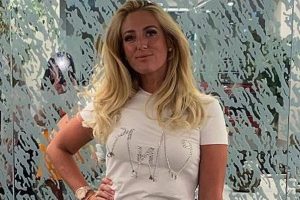 Paris Furyshowed off her enviable looks as she enjoyed a girly night out with her pals following what she termed a “stressful few days”.

The mum of six, 32, didn’t detail what her stresses were, but she appeared onLoose Womenthis week where sherevealed her plans to have more children . She told the panel: “My friends say, ‘have you not got enough?’ and I'm like, ‘I could have a few more’.”

While she’s yet to reveal any baby news, Paris shared with fans her ladies night out as she glammed up to celebrate a pal’s birthday.

She posted a picture of herself with the famous John Milton quote: “Every cloud has a silver lining,” and showed off her own best silver-wear.

With her blonde locks left loose, Paris wore a white tee with silver chain detailing with a metallic silver skirt.

She clutched a small handbag in a similar hue in one hand while showing off her toned legs in a pair of silver heels.

Fans shared their love for her ensemble, with one referring to husbandTyson Furyas they said: “Tyson is a lucky man having you.”

Another added: “You look great,” and many more telling her how beautiful she looks.

Mum-of-six Paris recently opened up on her traumatic birth with her youngest daughter Athena last August, speaking openly about it on Loose Women.

She said: “When we first got out of the hospital and we came home, Tyson said, 'That's it, we'll not have any more.'

“Not right now, and maybe never. But I've always wanted a big family. My friends say, ‘have you not got enough?’ and I'm like, ‘I could have a few more’."

Paris linked her wish for more children to family tradition, as she continued: “My granny had eight and I've always looked at that as the perfect family, but right now, it's a no.”

Tyson previously explained hisreasons behind his sons names , and why Prince is the chosen moniker for three of them.

Fury himself is nicknamed 'The Gypsy King' and said in his TV documentary: "I'm a king and they're princes until they earn their rightful name."

Tyson touched on the topic by saying: "My wife is called Paris. I'm Tyson and [gesturing to his son] he's called Prince John James. If the girl had a normal name it wouldn't fit in, would it?"

Paris previously hinted atwhat inspired their daughter's name Athena,as Tyson showed a plaque of goddess Athena which gave fans a clue as to why he'd chosen the name.