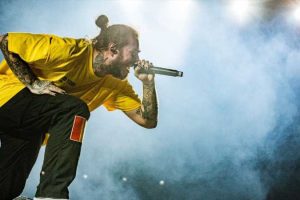 Austin Richard Post, better known by his stage name Post Malone was introduced to various genres from a young age due to his father’s profession of being a DJ for many years. At 14, he adopted the name Post Malone and began creating mixtapes before moving to Los Angeles to record music. Through SoundCloud, the rapper earned substantial views, with his song White Iverson receiving a million views within thirty days. After signing with Republic Records, Malone collaborated with big names in the music industry, including Kanye West. His first studio album Stoney achieved astronomical success, with Rockstar peaking at the No.1 spot on Billboard Hot 100. The rapper has accumulated over $45 million in net worth through his music, shows, and live specials.

Post Malone made a long-term real estate purchase when he bought a breathtaking apocalypse bunker in Utah in January 2022. Moving out of his Beverly Hills rental, it has now become his permanent residence. A home built to withstand any calamity, let’s take a look inside Post Malone’s $3 million Utah bunker.

Post Malone felt drained after living in Los Angeles, where he felt his creative process stumbling in creating music. While he hails from New York and spent his childhood in Texas, the rapper found his perfect home in Utah. Located in the capital of Salt Lake City, the residence is at the entrance of Cottonwood Canyon. According to TMZ, the house is on 6.75 acres of land and offers stunning views of the canyon, mountains, and the city skyline. The massive mansion has 12,702 square feet of living space.

RELATED: From Emily Blunt And John Krasinski To Kendall Jenner: Inside The $6.5 Million West Hollywood Mansion

A concrete driveway leads to the entrance of the asymmetrical home surrounded by valleys and mountains. Upon first glance, it is easy to recognize that the place has indoor-outdoor living. As the home remains connected to nature, various natural elements are used in the decor. The large curved glass door in the entryway leads straight to the foyer, which has a large rock structure at its center. The living room also features a large freestanding rock wall with an in-built fireplace and a grand piano by the neutral couches, as noted by House Digest.

The home was first constructed in 1986 but has been through various tweaks and changes to become sleek yet traditional. As mentioned by E Online, the house has five bedrooms and six bathrooms. Each room boasts floor-to-ceiling windows that offer tranquil views and the use of green plants to keep every corner refreshed. The bar is located in the living room, while the kitchen is a chef’s dream, equipped with modern appliances. It leads to the informal dining that boasts a 10-seater dining table.

The Master Suite is equally stunning, with glass walls and a comfortable bed as a primary attraction. The ensuite bathroom features marble walls, a whirlpool bathtub, and a glass-encased rain shower. Alongside the wine cellar, Malone’s property has a wine cellar, a fitness room, and s workspace. The 6.75 acres of space also has separate suites for the guests and a private office and conference room. Post Malone also mentioned that he had plans to build a recording studio on his property soon.

An Addition Of Bunker To Complete The Home

The Utah home is equally breathtaking in the outdoors with a picturesque backdrop. It has an outdoor kitchen with an alfresco dining area for enjoying the summers outside. A basketball fan, the home was preinstalled with a court for the rapper. The backyard also features a massive pool and a hot tub with hammocks and loungers. He has also added a pool basketball hoop by the edge for a fun game with friends.

Living life to the fullest has always been a motto for Post Malone, but he has also made preparations for life after an apocalypse. During an interview in 2017, Malone mentioned that he had plans to make the home an apocalypse-proof shelter and build an underground shelter, as stated by NY Post. Inside the bunker, there will be an addition of 30 bunk beds where he goes to relax now but can also be used as a shelter during a time of crisis. Before moving to Utah, the rapper lived in a stunning $26 million Beverly Hills rental that had similar features to his Utah home but offered views of Los Angeles instead.

Moving his life to Utah, Post Malone has created the perfect oasis for himself, complete with every amenity imaginable, including a recording studio to continue his passion for music. As someone cautious and prepared for future calamities, Post Malone has also installed a bunker that could protect him and his close ones during an emergency.

READ NEXT: The Chanel Story: How Coco Chanel Changed The World Of Fashion