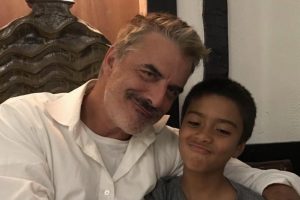 But, when he's not playing Carrie Bradshaw's longtime lover, the talented actor, 67, spends time with his Canadian actress wife Tara Wilson, 39, and their adorable brood.

Together Chris and Tara share two sons – Orion, 13, and little Keats who is just shy of to years old.

Chris often shares glimpses into his life with his family on his Instagram channel, including the odd peek at his stylish home.

There are photos in their family home, at their New York apartment, and at their summer abode in The Berkshires, Massachusetts too.

The actor has an impressive home in Los Angeles which boasts a busy playroom, where Chris snapped a photo of his youngest just the other day, captioned: "Keats wanted to drive cross country to see premiere of AJLT- I said no- he’s not happy with me."

There's an adorable little table area for the kids with a tiny table and two stools and Chris and Keats sat on it for a playful snap.

The lounge looks snug, with a quirky red and white sofa with pillows positioned on.

And a living room in Chris' home boasts a large black dining room and patterned chairs.

Carrie Bradshaw Vs. Samantha Jones: Who wins in the Sex and the City style stakes

His eldest could be seen reading a book over breakfast, in a photo captioned: "Harry Potter has saved him from Fortenite!!! (Not totally)."

And Christmas is no small occasion in the Noth household, with the actor sharing a snap of their impressive tree back in 2018.

"Late December night- waiting for the snow to fall- our Christmas tree makes me dream," wrote the actor.

Sex and the City

It comes as Peloton poked fun at the Sex and the City reboot, And Just Like That, with a cheeky advert.

The American exercise company’s shares drastically fell after Carrie Bradshaw’s husband Mr. Big died of a heart attack after an intense workout on one of their bikes during the first episode.

On Sunday, Peloton released a new commercial which showed actor Chris Noth as Mr. Big sitting next to Jess King – who played the instructor overseeing his final class – on a couch and drinking wine.

He’s heard saying: “To new beginnings,” as he toasts to Jess, who tells him: “You look great.”

Mr. Big then says: “I feel great,” before asking her: “Do you want to take another ride? Life's too short not to.”