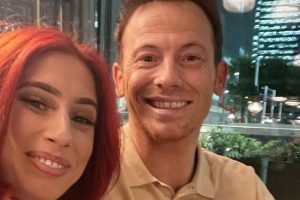 Joe Swash and Stacey Solomon are one of the best-loved celebrity couples out there, so fans were thrilled when the pair revealed that they had a "private blessing" Sunday 24 July.

The couple who are parents to five children between them, have been planning the big day for several months, with Stacey updating her followers every step of the way as she talked dresses, flowers and shared the inside scoop on how to plan a DIY Wedding.

Stacey, 32, and Joe, 40 finally managed to say ‘I do’ during an intimate ceremony at their family home, after their impending nuptials were postponed twice.

Their initial plans were derailed by Covid, with their second date also postponed as Stacey had fallen pregnant with their youngest child, and only daughter, little Rose Opal.

Yet as the couple tie the knot this weekend, we take a look back at their relationship so far.

They duo originally met on the set of I’m a Celebrity, Get Me Out Of Here in 2010 when former King of the Jungle Joe crowned Stacey the new winner and Queen of the Jungle.

Joe has since admitted that he fancied Stacey as soon as he saw her.

But at the time, they both had partners, so they remained friends until 2016 when they finally went official as a couple after six years of friendship.

Stacey and Joe confirmed they were dating after being spotted on a spa weekend with Stacey saying: “It’s going really well… We’re having fun, spending time together and getting to know each other.”

Their relationship moved fast, and by the following year, they had met each other’s children and even spent Christmas together as a family.

In July 2017, Stacey said: “He is such a brilliant dad which sells it to me the most – he has a great moral compass and a really good heart.

“We are really serious about each other, so we want to do things slowly. I can see myself walking down the aisle with Joe – he really is ‘The One'.”

In May 2019, the couple welcomed their first child together, a baby boy they named Rex.

Later that year, in November, fans were certain the pair had got secretly married while on holiday in the Maldives after Joe was pictured wearing a ring on his wedding finger.

The couple posed on the beach with Stacey’s sons in matching suits – seemingly confirming the news.

Reports later explained the suspicious 'wedding' ring as belonging to Joe’s late father, with the actor saying that he wears it for luck.

In December 2021, just two months after welcoming their second child together, baby Rose, Joe got down on one knee and proposed to Stacey for real in their home garden. Of course, she said yes.

Keen to take their relationship further, the happy couple snapped up their dream £1.2 million ‘forever home’ in Essex and have been busy renovating and decorating it to exactly their tastes ever since.

Transforming the pad into her dream home, the Tap to Tidy author has shunned professionals, opting to take on the task herself as she works through the property room by room.

Updating her followers every step of the way, in recent months, Stacey has shown off everything from a glamorous new kitchen complete with a "game changer" sink, through to unveiling her very own brand new swimming pool.