Inside the enormous Jennifer Lopez and Ben Affleck property portfolio 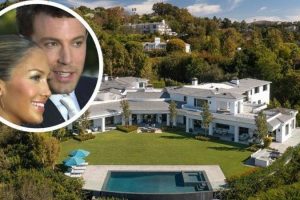 Love don’t cost a thing, but a ginormous real estate portfolio will set you back.

Anyone married later in life, be it an A-list celebrity or the rest of us, will bring some assets to the table. 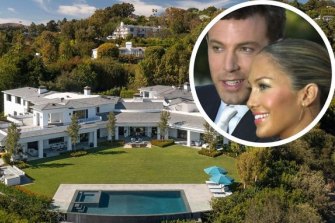 The Affleck family in mansion in Bel Air, known as the Bellagio Estate.Credit:Nine.com.au

In the case of Las Vegas newlyweds Ben Affleck and Jennifer Lopez, 18 years apart has resulted in them amassing about $US161 million ($236 million) worth of real estate. A small chunk is shared, but a large quantity belongs to Lopez and…her former fiancé.

In an intriguing side note to the new nuptials, Lopez reportedly still owns $US33.9 million worth of houses with her ex, baseball legend Alex Rodriguez.

She and Affleck own are understood to one own home together – a $US50 million mansion called the Bellagio Estate, in the LA suburb of Bel Air, which they bought this year, heating up speculation they would tie the knot.

This is a peek inside the Affleck and Lopez’s property portfolio, one of the most expensive and far-reaching of any Hollywood couple.

After his divorce from Jennifer Garner, Affleck bought this $US19.2 million beauty in an LA neighbourhood that is close to the former family home where Garner and their children continued to live. 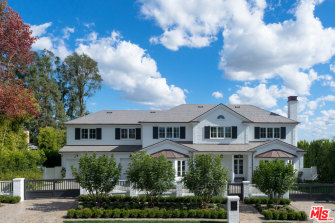 The house has several bedrooms, an entertainment room, gym and expanses of lawn beyond glass sliding doors from the lounge, with a fireplace.

He reportedly moved in after spending some time in the guest house on the estate he and Garner once shared, and bought together in 2009.

A penthouse in Madison Square Park

This home is the crowning glory of a super-exclusive apartment block of just four addresses, built in 1924, in New York City. 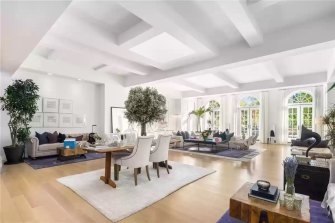 Lopez bought The Whitman penthouse for $US20 million after her divorce from actor and singer Marc Anthony, which whom she shares two children, Emme and Max.

Lopez tried to sell the chic pad. Even after a price cut towards the end of the campaign, she had no luck, and has retained it.

A buyer with deep enough pockets can buy one of the apartments in the building, which is now on the market for $US13.75 million, the New York Post reports.

This Star Island paradise with water vistas was bought by Lopez and A-Rod in 2020, three years into their relationship, and 12 months before their split, for $US32.5 million. 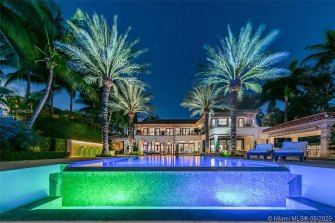 The very private Mediterranean-style estate, in Miami, has a pool, a wine room, elevator across two levels, library, a cabana beside the pool, outdoor bar under cover and a dock.

Lopez and Rodriguez are the owners of a $US1.4 million cottage in Encino, an enclave of Los Angeles. The price of this one is modest compared to the cash splashed on other properties on their books. 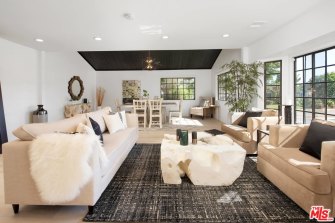 Architectural Digest suggested the house, a single-level sweetie pie which they also purchased in 2020, could be an investment or a property for friends and relatives to stay in, given at the time they did the deal, the couple were mainly living on Star Island in Miami.

The sweet three-bedroom house was built in 1948 and had been treated to a sleek, minimalist renovation before the couple took the keys.

This $US28 million showstopper is where Lopez is understood to reside when she is in Hollywood. 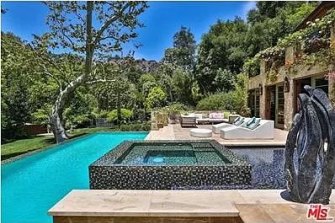 The sunny deck and pool zone of the Bel Air mansion. Credit:Zillow

The LA manor, which she snagged in 2016, has its own pub – yep! – and a cinema seating 30 people, plus a library, a 100-seat amphitheatre and a separate guest house.

Lopez’s Instagram followers will have occasionally caught a glimpse inside the colossal estate – she has previously posted video and pictures from the kitchen.

For beach holidays, Lopez can hit the road to this Hamptons estate, which has a sauna, steam room, theatre, and pool and playground, set in oversized lawns. 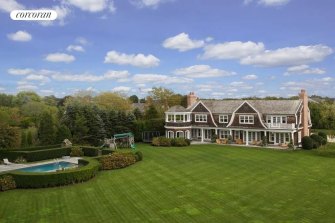 The Hamptons house cost Lopez half of what the owners has once hoped for. Credit:Corcoran

The massive estate, in Water Mill, New York, is very private, set on its own cul-de-sac.

Lopez paid almost $US10 million for it nine years ago, and managed to get it for half the original asking price, Dirt reported.

The owners wanted $US19.5 million but it spent almost 800 days on the market, and they did the deal with Lopez for far less.

This article was first published at Nine.com.au.

Most Viewed in Property