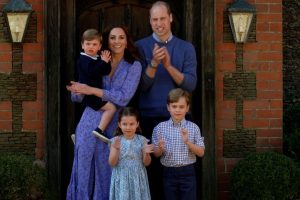 The Duchess of Cambridge has opened up on a number of occasions about her love of cooking, and it appears Princess Charlotte is also keen to enhance her culinary skills.

While she doesn't have to worry about preparing packed lunches for their brood as their prestigious school, Thomas's Battersea, offers a varied menu filled with lavish dishes, Kate does like to showcase her culinary skills when it comes to dinner time at their family home.

It's well-known that the Duchess leads an incredibly healthy lifestyle, and she previously told how George, Charlotte and Louis all love eating their greens, too. Get exclusive celebrity stories and fabulous photoshoots straight to your inbox with OK!'s daily newsletter

So it comes as no surprise that one of the mum-of-three's favourite meals to whip up at home for her family is vegetable curry, but while she is a fan of spicy food, she previously admitted that Prince William is not so keen.

The Cambridge children are also keen to help in the kitchen, especially Princess Charlotte. According to Vanity Fair: "When Kate or the housekeeper are preparing meals in the kitchen, Charlotte will set up shop next to them, her own toy set by her side to imitate." Another firm favourite in the Cambridge household is homemade pizza, which George and Charlotte enjoy helping to prepare with their mum.

While attending the Commonwealth Big Lunch event at St. Luke’s Community Centre in London, Kate got involved with cooking, and opened up about meal times at home.

"I've done that with George and Charlotte – making pizza dough. They love it because they can get their hands messy," she told one of the members.

Pasta is also popular among Kate and William's children, and they even help to make it from scratch. During a visit to Lavender Primary School, the Duchess sweetly told Matthew Kleiner-Mann how they go about preparing pasta at home.

Matthew recalled: "She was telling us how much her children love cooking and how they cook for her. They made cheesy pasta the other day. One stirs the flour, one puts the milk and butter in. And they make salads and stuff," according to People.

Kate also has an adorable tradition when it comes to George, Charlotte and Louis' birthdays, with the mum-of-three baking a cake for each of their birthdays every year.

While chatting to Mary Berry, she explained: "I love making the cake. It's become a bit of a tradition that I stay up 'til midnight with ridiculous amounts of cake mix and icing and I make far too much. But I love it."

Mary was quick to praise Kate's culinary skills too, branding her an "enthusiastic cook", saying: "Kate is a remarkable, enthusiastic cook – she’ll have a go at anything.

"She made a beautiful roulade and William had a go too and she was icing cakes and was an absolute natural, and I like the idea that she'll seek to do things well."

For all the latest celebrity gossip, sign up to our daily newsletter here .