‘Why is this so accurate?’ 19-year-old internet star goes viral with hilarious video that sees him perfectly imitating women who have just had a manicure

In a video titled ‘when girls get they nails done’, Twitter user @officialayekev shared a video of himself imitating women after they have gotten acrylic nail extensions.

The video, which sees 19-year-old Kevin carrying out different hand gestures, has since gone viral receiving a whopping 4.8 million views on Twitter.

The Texas-born social media star is best-known for sharing funny memes and videos to his social media pages and YouTube channel. 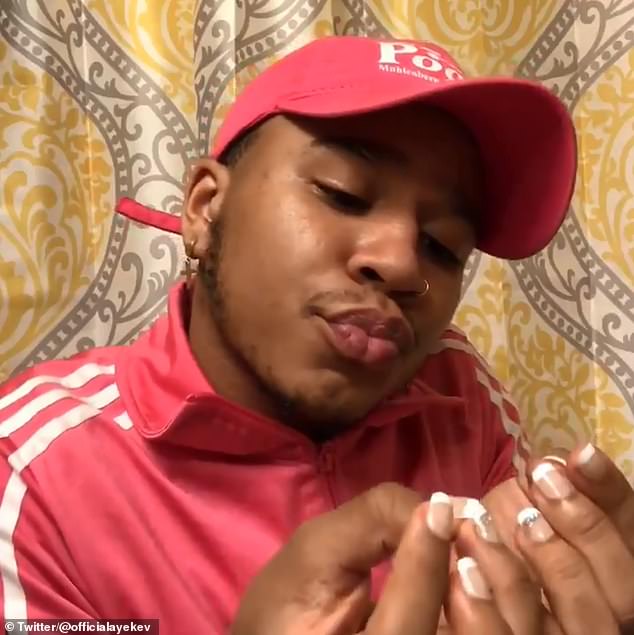 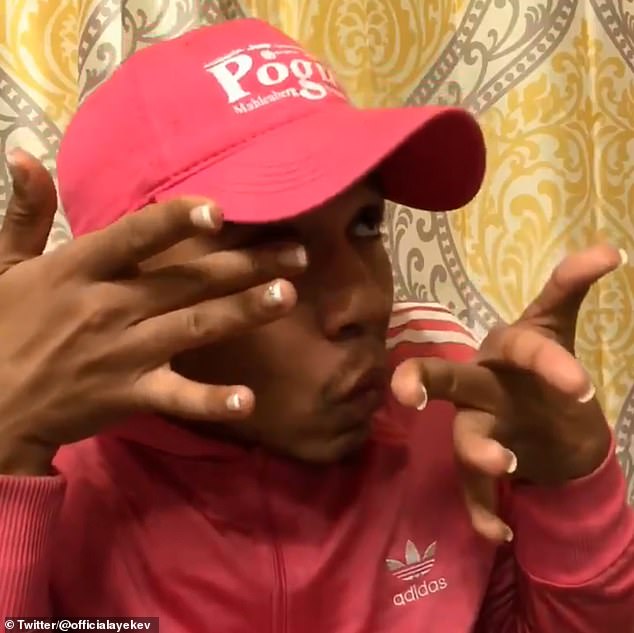 Act it out: The video, which shows Kevin as he pretends to be a woman who is trying to protect her long acrylic nails from breaking, has received 4.8 million views

The minute-long video ‘when girls get they nails done’ sees Kevin perform different tasks with the aim of showing off the fact that he is protecting the acrylic nails to avoid them breaking.

He washes his hands, turns on a coffee maker and taps his nails on a table as he shows off his freshly painted nails in the clip.

Wearing a pink Adidas sweater and a matching pink cap, the teen also flicked through a book and pretended to fluff up his eyelashes.

He also dramatically removes a credit card from a wallet, and texts on his phone while sitting in a car.

The video also sees hilarious scenes of Kevin sitting on a descending escalator as he poses with his nails to his face.

Another scene shows Kevin admiring and cleaning his nails in the bathroom. 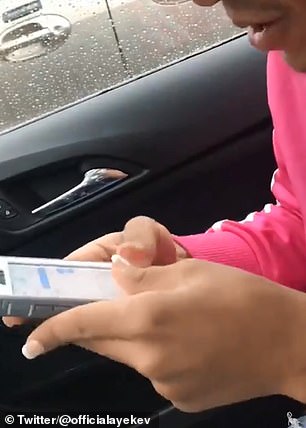 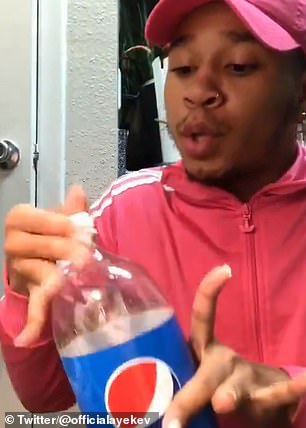 The struggle: The Texas-born internet personality carried out various tasks for the video including texting on a phone and opening up a plastic bottle all while trying not to break a nail 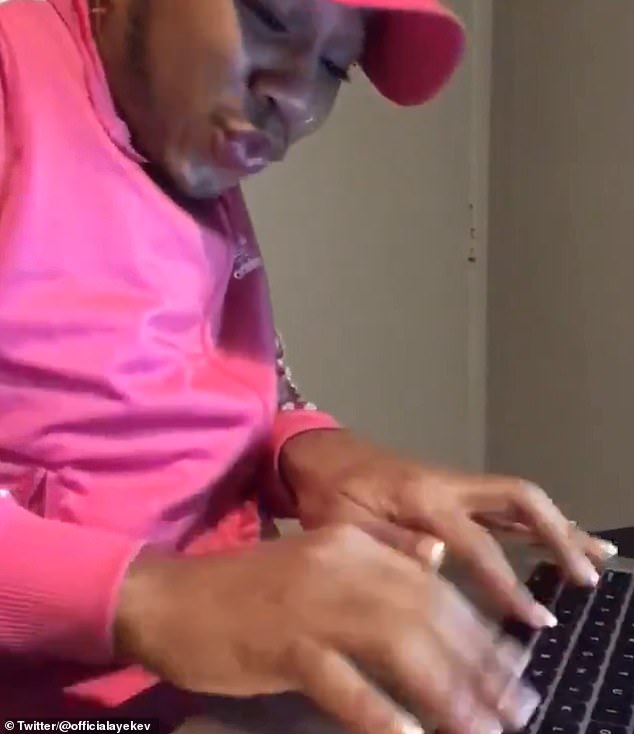 A tough job: Kevin can also be seen somewhat struggling as he pouts his lips and attempts to type on a computer keyboard

And the funny video seemed to resonate with quite a lot of people.

Meanwhile, over on Instagram the video received more than 70,000 views and hundreds of comments.

One Instagram user replied to the video, saying: ‘That be me typing on the computer in class.’

‘This is so relatable,’ another user commented.

Another Instagram user said: ‘I’m used to my nail length but this is so true.’

‘OMG, why is this so accurate?!’ added another.

Over on Twitter, some users even began posting pictures of their nails in response to the video. 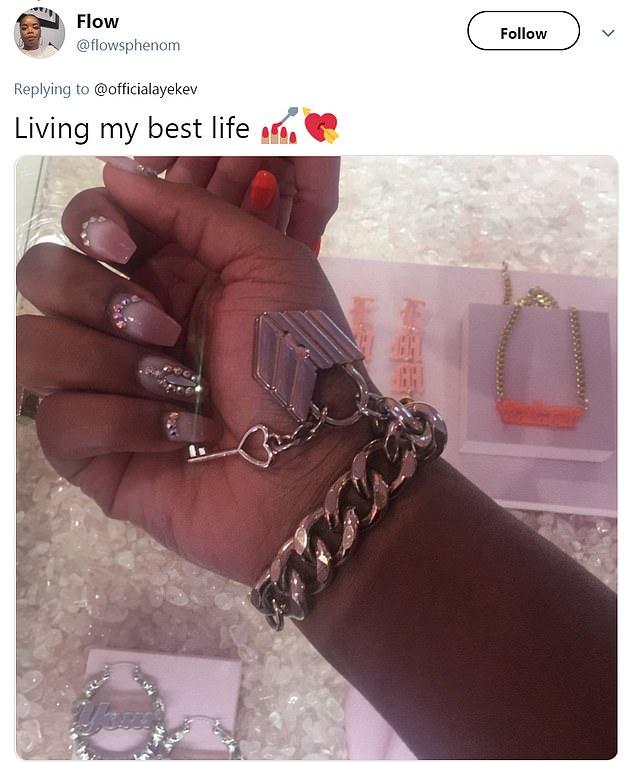 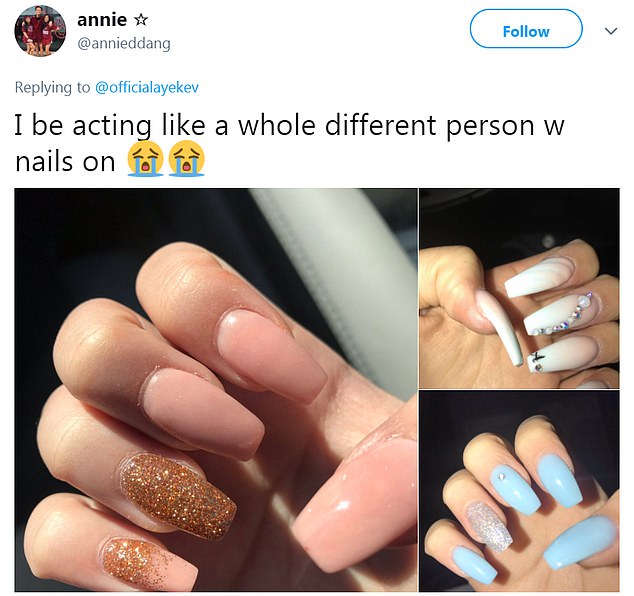 Relatable: A number of Twitter users replied to the video with photos of their own nails

Kevin became well-known on Instagram when he began posting funny memes to the social media platform in 2016.

He originally had almost 900,000 followers on Instagram before he was hacked, losing all of his content and followers.

He then relaunched the account and now has a total of 201,000 followers.

Kevin also regularly makes videos with his best friend Mark, 21, and uploads them to their YouTube channel Mark and Kevin.

Their videos include different challenges, pranks, question and answer videos and vlog-style videos. 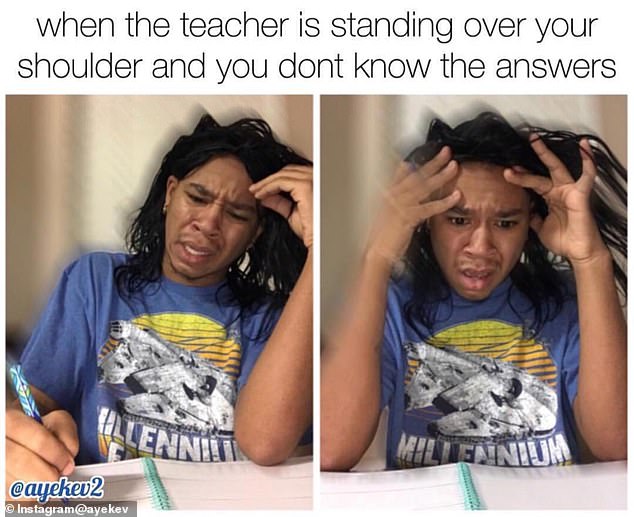 Instagram-famous: Kevin gained popularity on Instagram when he started posting funny memes in 2016 and gained almost 900,000 before his page was hacked