Home » Investors, courts say the transition to renewables is no longer an option

Investors, courts say the transition to renewables is no longer an option 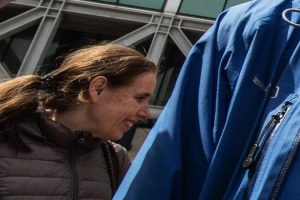 Two court cases last week, one certainly historic and the other less clear-cut, both signal that in the push towards renewables and away from fossil fuels, change is afoot.

Globally, the loss by Royal Dutch Shell in a landmark case in the Hague led by seven climate activist groups sent shockwaves through the fossil fuel industry. The court not only ruled that Shell must reduce its greenhouse gas emissions by 45 per cent by 2030 from 2019 levels, but it found the company responsible for emissions from its customers and suppliers and said that its activities constituted a threat to the “right to life” as set out in the European Convention on Human Rights. 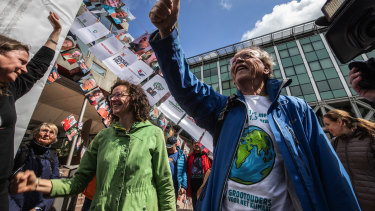 Environmental activists celbrate the verdict in the case against Shell in the Hague.Credit:Bloomberg

Closer to home, eight high-school student activists claimed a partial victory last week in a class action brought on behalf of all Australian children when the Federal Court found the Federal Environment Minister, Sussan Ley, had a duty of care not to cause young people harm from climate change.

While Justice Mordecai Bromberg stopped short of issuing an injunction that would have prevented the minister from approving Whitehaven’s Vickery Extension Project in northern NSW, he did say that approving the mine would have a small but foreseeable impact on climate change. Echoing the Shell verdict, he said that would increase the risk of “catastrophic” harm experienced by young people in the future.

Whitehaven’s response was predictably bullish, if contradictory, defending “a continuing role for high-quality coal in contributing to global CO2 emissions reduction efforts”. Shell took a different tack, highlighting instead its investment in “billions of dollars in low-carbon energy, including electric vehicle charging, hydrogen, renewables and biofuels”.

This was a wiser stance for the venerable Dutch company, because it is no longer just environmental activists who are pushing the fossil fuel industry to address climate change. Institutional money is moving in that direction too. 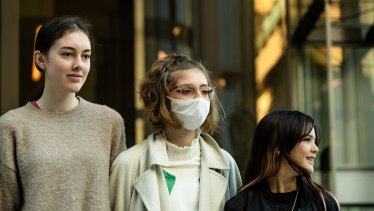 Laura Kirwan, 17, Ava Princi, 17 and Izzy Raj-Seppings, 14, who are among the eight students who sought to have Environment Minister Sussan Ley blocked from approving a coal mine due to climate impacts.

According to the Wall Street Journal, assets in investment funds focused at least partly on the environment have reached almost $US2 trillion, more than tripling in three years. “Big money managers,” says the WSJ, “see opportunities for substantial profits, and they also worry about financial risks associated with climate change.”

A majority of investors in Chevron last week backed a push forcing the company to substantially reduce emissions by selling a lower quantity of fossil fuels. ExxonMobil, too, has to face up to climate change after the election of two climate-focused shareholders to its board following a campaign by an activist hedge fund. Earlier this month Macquarie Group announced it will end its investments in coal by 2024. The once conservative International Energy Agency now advocates no new coal mining. Last November, Fortescue’s Andrew “Twiggy” Forrest told the miner’s annual general meeting he planned to transform his company into a “renewables and resources” company, owning and operating large-scale hydropower, geothermal, solar and wind projects.

And renewable energy is increasingly familiar to ordinary Australians. Despite few incentives for electric cars from federal and state governments (and dire warnings about the end of the weekend) they are no longer a rarity on our roads. Domestic solar panels are so widespread as to be unremarkable. Energy companies routinely offer sustainably-sourced electricity at a tiny premium, encouraging consumers to switch off gas, still seen in some quarters as the “healthy” fossil fuel option.

Australia has the natural resources – abundant sunlight for one – and technological knowhow to become a global leader in sustainable energy and to leave our fossil fuels in the ground forever. Once-futuristic schemes such as converting solar energy harvested in the outback into energy-dense hydrogen for export are no longer treated as science fiction.

But we are being held back by leaders on both sides of politics who are fearful of job losses in traditional industries, loss of export income, or simple failure to acknowledge the reality of climate change. They need to accept, as courts and corporations alike are increasingly doing, that a transition to renewables is no longer ideological or even economic. It is inevitable.

Note from the Editor

The Age’s editor, Gay Alcorn, writes an exclusive newsletter for subscribers on the week’s most important stories and issues. Sign up here to receive it every Friday.