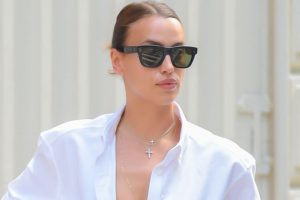 Whether you think it’s real love or not, one look at Irina Shayk’s latest outfit is enough to confirm the Kanye West relationship rumours.

The model was ready for the summer heat in an unbuttoned oversized shirt, which she partnered with boxer-style shorts and chunky sandals for her New York outing.

The outfit was a complete change of direction for the Russian beauty, who usually prefers figure-hugging styles.

Irina has also been seen in a $200 T-shirt recently, which was made through a collaboration between luxury fashion house Balenciaga and rapper turned fashion designer Kanye.

Irina’s new look is no surprise to Kanye fans, as he has a long-standing habit of revamping his love matches wardrobes.

In her case it started even before the two officially got together – with the rapper memorably ripping apart his future wife’s ‘ghetto’ closet on an episode of Keeping Up With the Kardashians.

Kim didn’t seem to mind, once saying: “I always ask his opinion on everything and he always helps me put together my looks.”

Indeed the reality star’s style can be divided into two eras – pre-Kanye and post-Kanye, with the rapper having a big influence on her fashion choices.

When Kim and Kanye first got together, Kim’s style was a world away from the high-end looks we recognise her for now.

Still in her full glam stage post Kris, Kim was all about bodycon dresses, oversized sunglasses (we can thank Paris Hilton for these) and teetering Louboutins.

The star added: “I probably had 250 pairs of shoes and when we were done cleaning it out, I had two pairs left and I cried.”

And Kim and Irina aren’t the only ones.

Since the Kanye dating rumours surfaced, the model was recently spotted in a more casual look while out in New York, wearing a black top and baggy jeans.

In more casual attire recently, Irina opted for an oversized Burberry shirt and shorts, accessorised with flat sandals and chic sunglasses. She matched the shirt with Burberry print shorts.

Kim Kardashian was known for her love of bodycon dresses and heels pre-Kanye.

Kim’s style changed dramatically while with Kanye, with trainers and baggy t-shirts taking centre stage in her wardrobe.

Kim’s camouflage shorts were a far cry away from her glamorous dresses in the pre-Kanye era.