Home » Lifestyle » Is Nick Fury A Skrull? This Detail Has Fans Questioning This ‘Avengers: Age Of Ultron’ Scene

Is Nick Fury A Skrull? This Detail Has Fans Questioning This ‘Avengers: Age Of Ultron’ Scene

The Marvel Cinematic Universe may sprawl across 21 movies and multiple galaxies and dimensions, but the filmmakers and producers behind all these movies are always incredibly careful to make sure they all align into one cohesive story free from any contradictions or continuity errors. That is why a newly revealed detail about Nick Fury in Captain Marvel is causing fans to freak out over a small scene in Avengers: Age of Ultron. Some fans are even asking is Nick Fury a Skrull in light of this small but significant scene.

Spoiler alert: This post includes light spoilers for Captain Marvel. This all stems from a memorable revelation about Nick Fury that comes towards the beginning of Captain Marvel. When Carol Danvers is explaining Skrulls to Fury when they first agree to work together, she first asks him to prove that he is not a Skrull by sharing personal memories. To cap off the exercise, she jokingly asks Fury to share a strange detail about himself that would be impossible for a Skrull to make up, and Fury reveals that he cannot eat toast if it is cut diagonally.

This may just sound like a fun, random little joke, but the detail could actually reveal a major twist when looking back on a small moment in Avengers: Age of Ultron. Nick Fury appears in that movie to guide the Avengers while they are recuperating at Hawkeye’s farmhouse. As he launches into an inspirational speech, Fury makes a sandwich, and yes, cuts it diagonally before eating it. 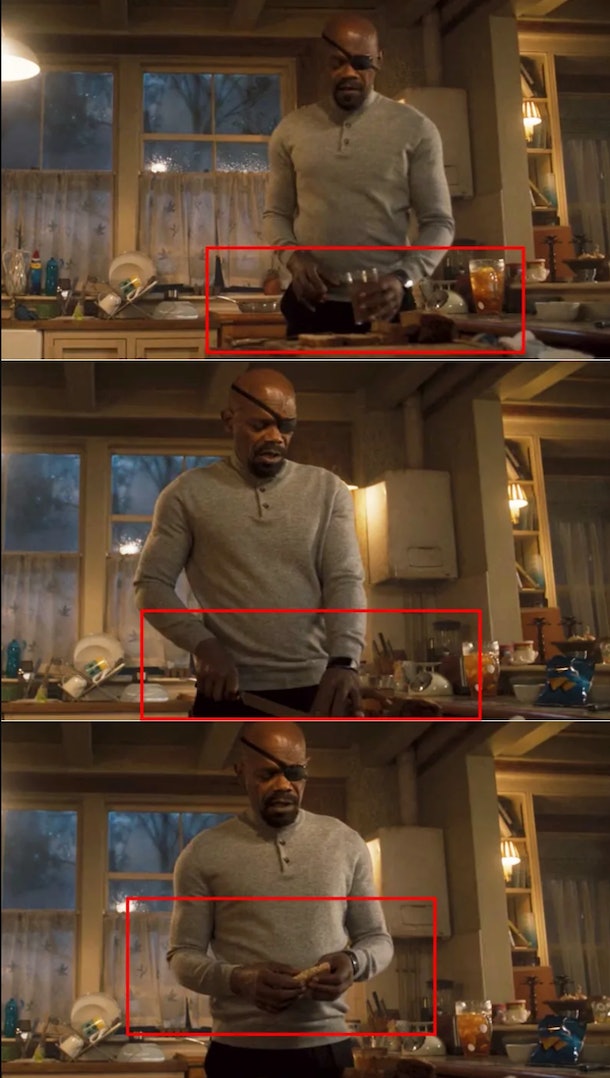 Umm, so is this even the real Nick Fury, then? If we want to get into technicalities, Fury did specifically say he couldn’t eat toast that is cut diagonally and he is eating a sandwich with untoasted bread in Age of Ultron, but it still seems like it totally goes against his Captain Marvel revelation.

Since Marvel is usually incredibly careful with any potential continuity errors, some fans think this scene is meant to subtly reveal that the present-day Nick Fury is actually a Skrull. Adding to that theory, fans pointed out that four Skrulls landed on the beach at the beginning of Captain Marvel, but only three were accounted for at the end. Plus, it is easy to see how Nick Fury’s personality is much different in Captain Marvel than in the rest of the Marvel movies. Most fans would chalk Fury’s hardened and more aggressive demeanor in later films up to the increased demands of his job at S.H.I.E.L.D., but it could possibly also be because a Skrull is posing as him following the events of Captain Marvel.

The other possible explanation for this bread conundrum is simply that Nick Fury has been so toughened up by all of the intergalactic warfare he’s been a part of since Captain Marvel that by the time of Age of Ultron, he has overcome his discomfort with eating triangular bread. That could very well be the case, but it just feels like such a specific choice for Marvel to include this inessential sandwich scene and then later reveal Fury’s bread-slicing quirk. Maybe Avengers: Endgame will clear up what’s going on.