Home » Lifestyle » ‘It freaks my lawyers out’: Why Joel Creasey reveals all in stand-up

‘It freaks my lawyers out’: Why Joel Creasey reveals all in stand-up

If Joel Creasey's thriving comedy career ever goes south, he could have a sideline in creative accounting.

"I realised my stand-up so often involves me telling crazy stories that I've gotten up to after drinking too much," he says of why his new nationally touring show was named Drink. Slay. Repeat.

"So I figured I'll just title the stand-up show about drinking, then it becomes a tax write-off every time I do it!" 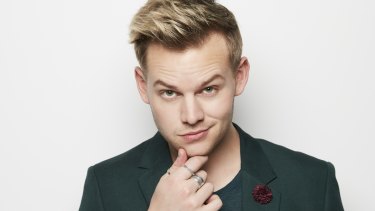 Comedian Joel Creasey has no interest in heartfelt comedy.

The 28-year-old Aussie comedian – a regular fixture on small screens as a team captain on Ten's cinematic quiz Show Me the Movie!, a host on SBS' coverage of the Eurovision Song Contest and with a recent appearance on Netflix's special Comedians of the World – says Drink. Slay. Repeat won't follow the present stand-up trend of mixing the personal and political.

Instead, the audience can expect an evening of frivolity and Creasey's charming but acid wit as he spills anecdotes about his experiences with celebrities such as Meghan Markle, J.K. Rowling and Kylie Minogue.

"There are so many comedy shows around that are really political. Some shows are really heartfelt and make you laugh and cry at the same time. Mine couldn't be further from that," he says.

"I always say, if anything, you'll leave my show dumber, but, god, you'll have a good time. It's just a really gossipy hour and a half of showbiz stories."

While many media personalities baulk at naming names when they tell a tale about a fellow celeb, Creasey  pulls no such punches.

"I always name-check people. It freaks my lawyers out, but I think it's funnier and more genuine that way."