Home » Lifestyle » ‘It wasn’t worth it’: Sanja’s cosmetic surgery caused years of pain

‘It wasn’t worth it’: Sanja’s cosmetic surgery caused years of pain

It was four weeks after Sanja Kukic had her first breast implant surgery that she knew something wasn’t right.

“Seven years have passed since then. And I still don’t feel normal.” 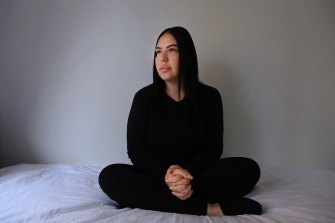 Sanja Kukic, 29, said she spent more than $30,000 on implant surgeries and a brachioplasty, or arm lift, in Sydney during 2014 that caused “irreversible damage”.Credit:Kate Geraghty

Ms Kukic, now 29, said she spent more than $30,000 on implant surgery and a brachioplasty, or arm lift, with a cosmetic surgeon in Sydney during 2014 that caused “irreversible damage”.

“It was supposed to improve my happiness, but I had an open wound from the lift that lasted eight months and implants that were displaced. It wasn’t worth it,” she says, noting that after complaining of pain and discomfort the “cosmetic surgeon stopped returning my calls”.

She has since had multiple staged revision surgeries and scar tissue removal with a plastic surgeon to try and “fix everything that went wrong”.

Ms Kukic is among about 150 women each year who undergo breast implant removal at reconstructive surgeon Anand Deva’s Sydney practice; many because of rupturing and hardening of the tissues around implants.

“Cosmetic surgery is a mirage in Australia. There is no specific speciality and so any doctor who wishes to claim the title of cosmetic surgeon can do so,” Professor Deva said, who is also head of plastic and reconstructive surgery at Macquarie University.

Under Australian law, any qualified doctor can call themselves a cosmetic surgeon, whereas plastic surgeons have received at least 12 years of medical and surgical training.

“We need transparency and credentialing to protect unsuspecting patients,” he said.

Professor Deva said it was critical the government establish a pathway for the formal certification and safe practice of cosmetic surgery in order for the regulator, the Australian Health Practitioner Regulation Agency, to administer it. 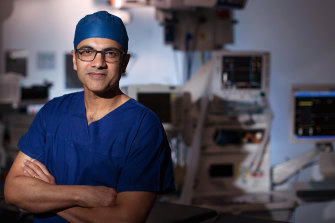 Dr Deva said it is critical the government establish a pathway for the formal certification and safe practice of cosmetic surgery in order for the regulator, the Australian Health Practitioner Regulation Agency, to administer it.

“Because a cosmetic surgeon can practice without needing proper certification it is difficult to enforce regulation on something that doesn’t exist within the regulatory framework.”

Last month a joint investigation by The Sydney Morning Herald, The Age and the ABC’s Four Corners uncovered a list of disturbing practices in the clinics of celebrity cosmetic surgeon Daniel Lanzer, including allegations of serious hygiene and safety breaches and botched procedures.

It sparked calls by peak medical groups including the Royal Australasian College of Surgeons and the Australian Society of Plastic Surgeons for restrictions on which doctors can market themselves as cosmetic surgeons.

In November 2019 health ministers agreed to restrict the title “surgeon”, but the laws have not yet been changed.

In the Herald this month Patrick Tansley, president of The Australasian College of Cosmetic Surgery and Medicine, said the college called for regulation and accreditation for all doctors who perform cosmetic surgery, as “there is for any other specialised field of practice”.

“All doctors performing cosmetic surgery should have to meet a national accreditation standard and be on a register of cosmetic surgeons. The standard would require essential training, qualifications, competency and recertification specific to cosmetic surgery,” Dr Tansley wrote.

A decade ago about 6000 women a year in Australia had breast implants inserted, Dr Deva said, now it is up to 20,000, with roughly 75 per cent for cosmetic augmentation and 25 per cent for reconstruction after cancer treatment.

This month Cancer Institute NSW launched a major surveillance project to monitor and track breast implants used for reconstructive surgery in women who have had breast cancer, using extensive datasets.

“The Therapeutic Goods Administration strongly encourages consumers and health professionals to report all problems associated with medical devices, including breast implants," she said.

Last month the US Food and Drug Administration took several new actions to introduce warnings and a checklist to advise patients of the risks and side effects of implants.

In 2020, the Australian medical device watchdog banned the use of three breast implants amid concerns that highly textured implants pose an increased risk of breast implant-associated anaplastic large cell lymphoma.

“The pandemic has seen a drop in number of cases, as with other cancers, but we are now seeing a rebound,” Professor Deva said.

Most Viewed in National