Home » Lifestyle » It’s true: we grannies really are more connected to our grandchildren

It’s true: we grannies really are more connected to our grandchildren 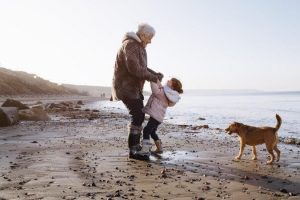 I am not a knitter. But when my daughter and her husband told me they were expecting a baby, my first instinct was to buy a pattern for a matinee jacket and six balls of soft white wool. Why? Maybe it was my nurturing instincts. Or perhaps I just needed to do something to show this baby how excited I was. Or maybe it’s because it’s what my mother would have done if she’d still been alive to see her first great-grandchild.

It took me nine months to complete – by which time the jacket had become a blanket due to my technical inabilities. My speed increased during my daughter’s two-day labour and I finally cast off seconds before the phone rang. “Mummy,” said a magical voice. “We’ve got a little girl!” 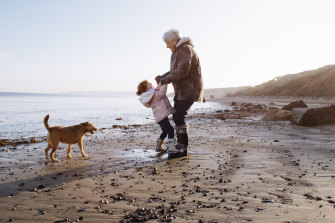 There’s a particular bond formed once our children start having little ones of their own.Credit:iStock

Nothing and no one can describe that elation in my heart. That tsunami of love that swept through me. I got to the hospital before Rose was an hour old. My first thought was that she had the family Titian auburn hair! My second was that I instantly knew I would die in a heartbeat for this baby.

Some things are hard to explain. And the extraordinary bond between grandparent and grandchild is perhaps one of them, as recent research from Emory University in Atlanta, Georgia has suggested. The study reported that grannies may be even more emotionally connected to their grandkids than to their own sons and daughters.

But for this granny, there was another factor. Due to a genetic trait, we knew there was a 50-50 chance that Rose would have benign neonatal familial convulsions. Her first fit happened when she was four days old.

Then followed countless trips back and forth to intensive care. When she was four months, Rose began the tell-tale eye rolling when I was in charge. A certain terrified calmness took over as I rang my daughter and we called the ambulance. Hours later, she was back home, perfectly happy.

Does this account for that incredibly close bond I have with Rose, who stopped fitting at eight months and is now a happy, well five-year-old? Or is it because she looks a bit like me – my childhood pics could be of her. Is it because she tells wonderful long stories (I can’t help hoping she’ll be an author, like me). Or is it because my daughter (her mother) was already carrying Rose’s egg when she was in my body? When her little brother George was born two years later, I did wonder if I’d feel the same. But I do.

My method of grandparenting is “inconsistency”. We break the rules, such as eating in front of the television. I bribe them with chocolate buttons. I might let them stay up late when I babysit. Yet I have strict boundaries on safety. I’m constantly aware of the responsibility when they’re in my care. This so-called myth that grandparents know what to do because they’ve done it before isn’t always true. Every child is different and accidents can happen. On the other hand, I have fun in a way I didn’t always have with my three, partly because I was working as a freelance journalist at the same time. Being a grandparent gives you a pass to time off. Yesterday, George and I had a blissful half an hour on the beach making stone castles. Rose and I pretend to be mermaids. I have a feeling of being “on holiday” when I’m with them.

I’ve learned to be more patient over small issues than I was as a mother because I’ve learned not to sweat the small stuff. They won’t wear a coat? OK. Instead of arguing, I’ll take it with me and they’ll wear it when they’re cold. Some people say that children and grandparents have a common enemy – the parents. I don’t see it as that. It’s more of a joke. “Don’t tell your mother” is a favourite phrase of mine to Rose and George. They know I don’t mean it.

But it’s not all easy going. “It can be hard for grandparents who aren’t nearby, especially if other grandparents in the family are closer,” says Anne Waddington, psychotherapist and formerly a child protection barrister. “Existing conflict in the family can also be illuminated by the arrival of grandchildren who might be used inadvertently as pawns. The key thing is communication and recognising that it should always be about the child.”

Perhaps I ought to remind my daughter, when she’s tired from juggling it all, that one day she too – with luck – will be able to build pebble castles with her grandchildren on the beach and have ice creams in December before tea. I can just hear her saying: “Don’t tell your mother.”