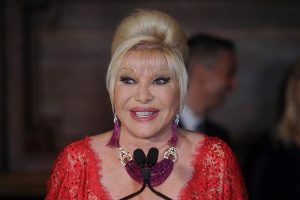 Ivana Trump, the first wife of Donald Trump who was also a businesswoman and television personality, has died at 73, ABC News confirmed. Police responded to a cardiac arrest call at her New York City apartment on Thursday and she was pronounced dead.

Ivana was married to Donald Trump from 1977 to 1992 and is the mother of their children Donald Jr., Ivanka and Eric. Their marriage was shaken by his high-profile affair with Marla Maples, which became tabloid fodder in the late ’80s.

Professionally, she held positions at the Trump Organization, launched various businesses, including jewelry and clothing brands, and was a fixture on QVC and Home Shopping Network.

Donald Trump released a statement about her death on Truth Social, writing, “I am very saddened to inform all of those that loved her, of which there are many, that Ivana Trump has passed away at her home in New York City. She was a wonderful, beautiful, and amazing woman, who led a great and inspirational life. Her pride and joy were her three children, Donald Jr., Ivanka, and Eric. She was so proud of them, as we were all so proud of her. Rest In Peace, Ivana!”

The family also released their own statement to the press, which read, “It is with deep sadness that we announce the passing of our beloved mother, Ivana Trump. Our mother was an incredible woman — a force in business, a world-class athlete, a radiant beauty, and caring mother and friend. Ivana Trump was a survivor. She fled from communism and embraced this country. She taught her children about grit and toughness, compassion and determination. She will be dearly missed by her mother, her three children and ten grandchildren.”

In addition to her various business ventures, she also wrote several books, hosted a 2006 reality show called “Ivana Young Man” and appeared on the U.K. version of “Celebrity Big Brother” in 2010. She also had a memorable cameo in the 1996 movie “The First Wives Club,” which you can watch below.