Ever since he quit the Cabinet last year, Boris Johnson has never hidden his hostility towards the Prime Minister’s Brexit policy and has posed as the true defender of the Leavers’ flame.

With a watchful eye on the Tory leadership – and the hearts of Leave-voting Conservative Party members – he has used his weekly newspaper column to demand she take an ever tougher line against Brussels.

It never seemed likely Theresa May could satisfy either him or the hardliners in the Eurosceptic European Research Group and last night the festering frustration of both sides boiled over during a dramatic clash at a meeting of the Tory parliamentary party. 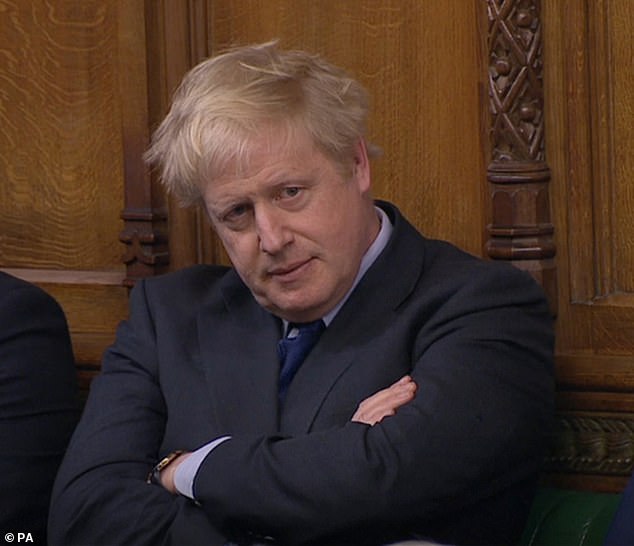 In a packed Westminster room, a typically resolute Prime Minister dared her former foreign secretary to oppose her in today’s crunch vote on an amendment tabled by Sir Graham Brady.

Sir Graham wants the Irish backstop to be replaced with ‘alternative arrangements’. Mr Johnson and the hardline Brexiteers are unhappy with his wording because they see it as too vague.

During a tense and occasionally raucous hour-long meeting, Mr Johnson showed his hand and pointedly asked Mrs May what difference Sir Graham’s amendment is going to make even if she wins the day and takes it back to Brussels.

And after months of shadow boxing by Mr Johnson in the Press, it was a signal moment. He had thrown down the gauntlet and challenged his leader in a quasi-public forum. ‘What DO you want, Prime Minister?’ he asked. But – undeterred – the PM hit back, saying: ‘You won’t find out unless you support us, Boris.’

Mrs May was loudly applauded and appeared to win the battle last night. She will whip the amendment today – daring Mr Johnson and his Eurosceptic allies to oppose her.

But the truth is that for both these Tory heavyweights, the stakes in the coming weeks are incredibly high. 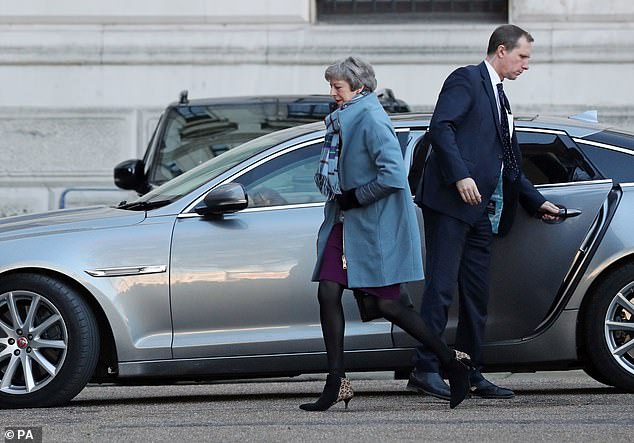 A typically resolute Prime Minister, pictured, dared her former foreign secretary to oppose her in today’s crunch vote on an amendment tabled by Sir Graham Brady

The amendments  and outcomes 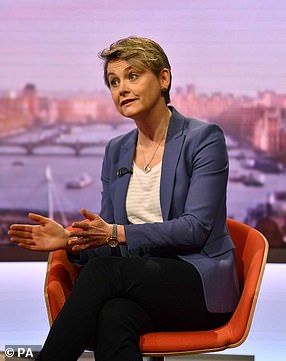 Commons is expected to vote tomorrow on amendments including Yvette Cooper’s. The Labour MP is pictured on The Andrew Marr Show on Sunday

WHAT IT DOES: Forces ministers to extend Article 50 beyond March 29 to stop No Deal.

HOW IT WORKS: Ministers lose the power to decide what is debated on February 5, which passes to backbench MPs. Miss Cooper proposes a law forcing Mrs May to ask for a delay on Brexit if No Deal is agreed by February 26.

COULD IT SUCCEED? With enough votes from Tory rebels, yes.

WHAT IT DOES: Give control over Parliamentary business to MPs.

HOW IT WORKS: Government loses power over the Commons every Tuesday from February 12 to March 26 so backbench MPs could vote on Brexit. Could delay Article 50 or change the deal to include a customs union or second referendum.

COULD IT SUCCEED? Could pass with the support of pro-Remain Tories, Labour backing.

WHAT IT DOES: Proposes replacing the Northern Ireland backstop with ‘alternative arrangements’ to avoid a hard border. Also supports leaving with a deal.

WHOSE PLAN? Sir Graham Brady, chairman of the 1922 Committee.

HOW IT WORKS: Allows Mrs May to go to Brussels and say the EU must make concessions on the backstop or get rid of it.

COULD IT SUCCEED? Only if selected by Speaker Bercow – who could ignore it.

DAME CAROLINE SPELMAN’S PLAN TO RULE OUT NO DEAL

WHAT IT DOES: Stops the UK leaving without a deal.

COULD IT SUCCEED? Yes, if enough Tory rebels vote in favour.

WHAT IT DOES: Demands changes to the deal and hints at a second referendum.

HOW IT WORKS: Ministers must let Parliament discuss No Deal, and proposes staying in a permanent customs union. If that fails, it suggests a second referendum.

COULD IT SUCCEED? Highly unlikely, because it won’t win support from Tory rebels.

For Mrs May, this is a final gamble in a seemingly endless war of attrition with her own MPs and the DUP, who only two weeks ago appeared to have dealt her Brexit deal a hammer blow by voting it down in the Commons.

For Mr Johnson, opposing her is also extremely risky. What if Tories – and the wider public – view his inflexibility with dismay? They make take a dim view of his disloyalty to a sitting Tory leader determined to make sure Brexit happens and to extract concessions.

If pragmatic Tory Eurosceptics drift into Mrs May’s camp, he could be left standing alone with a small group of irreconcilables, doing grave damage to his hopes of winning the nomination to be next Tory leader when Mrs May departs.

In his Daily Telegraph column yesterday, Mr Johnson had appeared to play the peacemaker, claiming he would support Mrs May if she gave him what he wanted.

Indeed, he said: ‘Just sometimes we can be forgiven for a sudden surging hope that at last this country is about to show our EU partners what we are made of… I have heard it from the very lips of senior sources in government – speaking with the authority, it is claimed, of the Prime Minister herself – that this country is about to seek proper binding legal change to the current lamentable Withdrawal Agreement.’

However, by still insisting on a legally binding exit mechanism or ‘freedom clause’ to the controversial Irish backstop, Mr Johnson was, in truth, demanding something Mrs May could not offer. 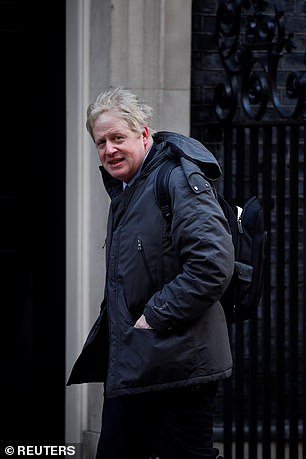 In his Daily Telegraph column yesterday, Mr Johnson, pictured earlier this month, had appeared to play the peacemaker

Ten days ago, there appeared some sign that the ERG line was softening. Its chairman, Jacob Rees-Mogg, told the Daily Mail that leaving the EU with Mrs May’s deal would be preferable to staying in. By last night, this hope was dead, as Mr Rees-Mogg declared his opposition to the Brady amendment.

But this intransigence could end up backfiring. If Mrs May cannot get her deal through, a Remainer-dominated Parliament could take control of the negotiations and force her to take a much softer approach. A formal customs union would be a likely first step towards attracting Labour MPs.

If she can prove she commands a Commons majority today, the Prime Minister can go to Brussels and demand concessions. Come back with a significant win in her pocket and there is some slim chance she could get Brexit over the line.

But if she cannot, there is little chance of a better deal. For it is not just the ERG Mrs May has had to worry about.

As is so often the case with Brexit, she has also been fighting on another front. MPs from her Remainer wing are deeply worried about No Deal and are threatening to back today’s amendment from Labour’s Yvette Cooper and former Tory minister Nick Boles.

Controversially, it would take power from government to propose legislation, clearing the way for a backbench Bill which would instruct Mrs May to secure a nine-month extension to Article 50 if she failed to get a deal through the Commons by February 26.

If it passed, officials warned last week, Mrs May would have her ‘legs cut off’ at her point of maximum leverage. Allies of Mr Rees-Mogg say they are confident the Cooper amendment can be stopped today.

But what if they are wrong? Could they find their refusal to support the PM leads not to an ideologically pure No Deal, but to a Brexit that leaves the UK even closer to single market rules, including freedom of movement.

Three years ago Mr Johnson, more than any other politician, convinced the country to vote Leave. What a grim irony it would be if he now destroyed the best chance for a good deal.

What is Tuesday’s Plan B vote and what will it mean?

Because Theresa May’s Brexit deal was defeated, the law says she must tell Parliament what her Plan B is.

This has to be done in a motion to the Commons, which will be voted on by MPs on Tuesday night.

That motion can be re-written by MPs if they table amendments and win a vote in favour of them.

Some amendments have already been tabled and MPs can keep producing them until Monday night.

What does May’s plan say?

It promises more cross-party working, renews commitments to protecting workers’ rights after Brexit and says the PM will ask Brussels for more concessions on the backstop.

It it based on the current deal that was crushed by 230 votes last week.

What do the main amendments say?

Jeremy Corbyn’s amendment says Parliament should vote on ‘options’ including a renegotiation of the deal to get a permanent customs union and for a second referendum.

A cross party amendment from Yvette Cooper and Nicky Morgan seeks to block no deal by giving time to a draft law that would require the Government to delay Brexit if a deal has not been agreed by February 26. It upturns normal convention by putting a backbench MP’s Bill ahead of Government plans.

An amendment from Tory rebel Dominic Grieve seeks to set up weekly debates that would mean regular votes on what to do in the absence a deal. His amendments sets aside six named days for the debates – including as late as March 26.

The Government also appears to be encouraging MPs to back amendment from two senior Tory MPs.

One from Andrew Murrison would effectively set a time limit on the backstop of December 31, 2021.

Another amendments tabled by Sir Graham Brady, chair of the powerful 1922 committee, would effectively eradicate the backstop and demand the EU and UK find other solutions.

Some ministers hope that if these amendment receive strong support it will pile pressure on the EU to make concessions on the backstop – which Brexiteers fear the UK will be stuck in forever, and the DUP believes risks splitting the union.

What would the vote do?

Legally nothing – but if the Commons votes in favour of a clear way forward by a majority it will be a major political signal of what might happen.

Is it a new ‘meaningful vote’ that can approve May’s deal?

No. At some point, the PM will have to stage a repeat of last week’s vote to get explicit approval from MPs to go ahead with her deal if she wants it to survive.