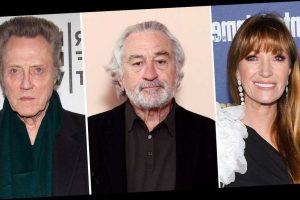 Working with Hollywood royalty! Jane Seymour has nothing but nice things to say about her experience with fellow veteran actors Robert De Niro and Christopher Walken on The War With Grandpa.

“I was very pleasantly overwhelmed,” the actress, 69, reveals exclusively in the new issue of Us Weekly. “Mr. De Niro was lovely. He literally just turns the bright lights on the minute they say action. And most of the rest of the time he keeps himself to himself pretty much.”

One moment in particular stood out to Seymour. “While I was working with him and we were doing a trampoline scene, we were all hanging out together. Somebody should have filmed what was going on,” she teases. “You can imagine: Christopher Walken, De Niro, Cheech Marin and myself. We were all [sharing] the war stories and the funny stories.”

Walken’s costars made a few jokes at his expense too. “It was the old fogies reminiscing and laughing, and, of course, with Christopher Walken, everybody feels that they have to do a Chris Walken imitation and he does by far the best imitation,” she says. “So it was somewhat redundant.”

Seymour was already familiar with the 77-year-old Oscar winner’s trademark before The War With Grandpa, a comedy that follows a boy who pranks his grandfather (De Niro). “This was my second time around, so I was almost an expert having done Wedding Crashers with him. I knew what to expect,” she notes. “His cadence is brilliant and it works. It’s hilarious and it’s so dry! You can imagine how much fun we all had on set.”

While the cast enjoyed plenty of laughs, they also had to do stunts. “I’m sure Mr. De Niro and Chris Walken have the bits that don’t function as well,” she says. “Yes, there were some stunt doubles there, but you still have to land. So I had a stunt girl who threw herself against the wall and then landed. Well, I still had to throw myself against the wall and land and be trampled.”

Seymour quips that they “all survived” the action scenes, but things could have turned out differently: “We were all looking at one another, waiting for the ambulance to come and take one of us out.”

For more on the set hijinks, pick up the new issue of Us Weekly, on newsstands now.

The War With Grandpa is in theaters now.

END_OF_DOCUMENT_TOKEN_TO_BE_REPLACED

END_OF_DOCUMENT_TOKEN_TO_BE_REPLACED
We and our partners use cookies on this site to improve our service, perform analytics, personalize advertising, measure advertising performance, and remember website preferences.Ok