Our cold road to gold: As their journey from working-class Nottingham to Olympic glory is relived in an uplifting new drama, Torvill and Dean on how they skated through hardship and heartache to reach the top

The dead of night at Belfast’s Dundonald International Ice Bowl, and two figures who appear to be legendary ice dancers Jayne Torvill and Christopher Dean are effortlessly gliding and pirouetting around the empty rink.

Yet a closer look reveals they are last year’s British ice dancing champions Nick Buckland and Penny Coomes, made up to look just like their heroes.

Minutes later, two more Torvill and Dean lookalikes join them, but these two are clearly no professionals.

They are actors Poppy Lee Friar and Will Tudor, who are stepping into the skates of Torvill and Dean for ITV’s Christmas Day film about the 1984 Olympic champions, with Nick and Penny as their body doubles.

Between them, they’ll bring the ice dancers’ inspirational story to the screen, from their humble, working-class beginnings in Nottingham, through fate and family traumas, right up to their crowning glory in Sarajevo. 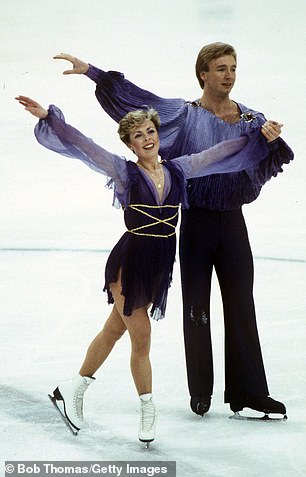 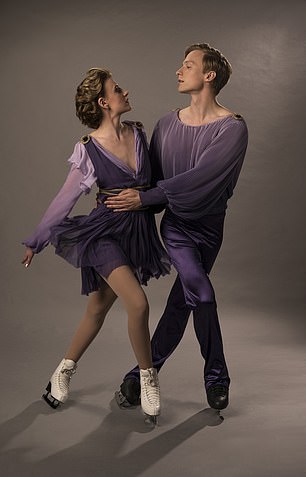 Jayne Torvill and Christopher Dean’s road to Olympic gold is recreated in a new ITV drama to be shown on Christmas Day. Pictured: The ice dancers  in their famous Bolero routine in 1984 (left) and recreated by Poppy Lee Friar and Will Tudor (right) in the drama The original footage of Torvill and Dean’s jaw-dropping routine to Ravel’s Bolero that earned them a full house of perfect 6 scores for artistic impression, a feat never achieved before, will then be used for the film’s mesmerising finale.

‘We’ve gone from knowing nothing about skating to being taught by the best – Penny and Nick,’ says Will, best known as Olyvar in Game Of Thrones.

‘I’d only skated twice before – once at a birthday party and once for a date, which was a bad idea!’ Poppy, most recently seen in school drama Ackley Bridge, is similarly inexperienced.

‘I’d only skated a few times before, but Nick and Penny are amazing instructors,’ she says.

‘They’ll be performing the incredible moves you see, we’ll just take all the glory!’

For the real Torvill and Dean, the film is an emotional glide down memory lane.

They spent hours with scriptwriter William Ivory, telling him the inside story behind their success.

‘It’s not so much the details, it’s more the emotional side of everything,’ says Chris.

‘It was almost like somebody put us in a hypnotic state and took us back, because a lot of the time we don’t really think about the past.’

The film focuses not only on their triumphs but also on the low points they overcame.

‘We’re from working-class backgrounds and it wasn’t that easy,’ Jayne recalls.

‘But now we think how lucky we were to have had the opportunities we did. We were in the right place at the right time.’ 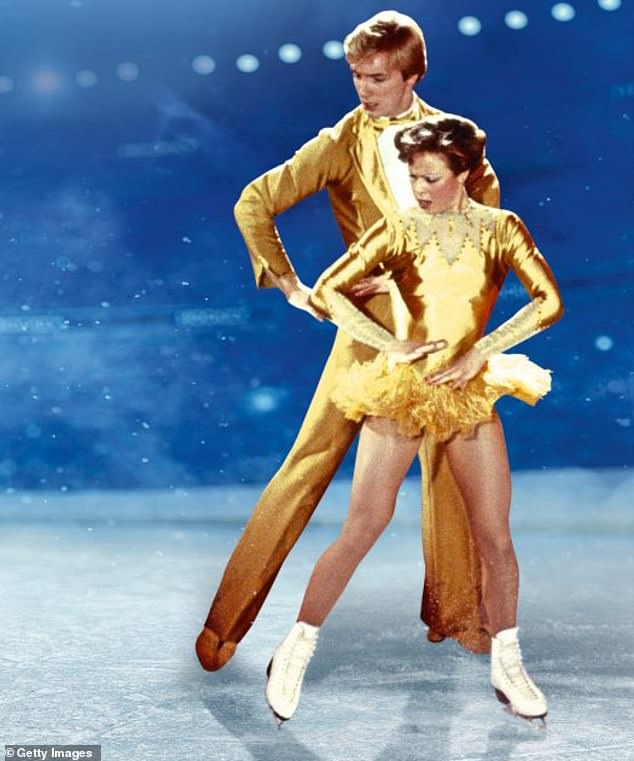 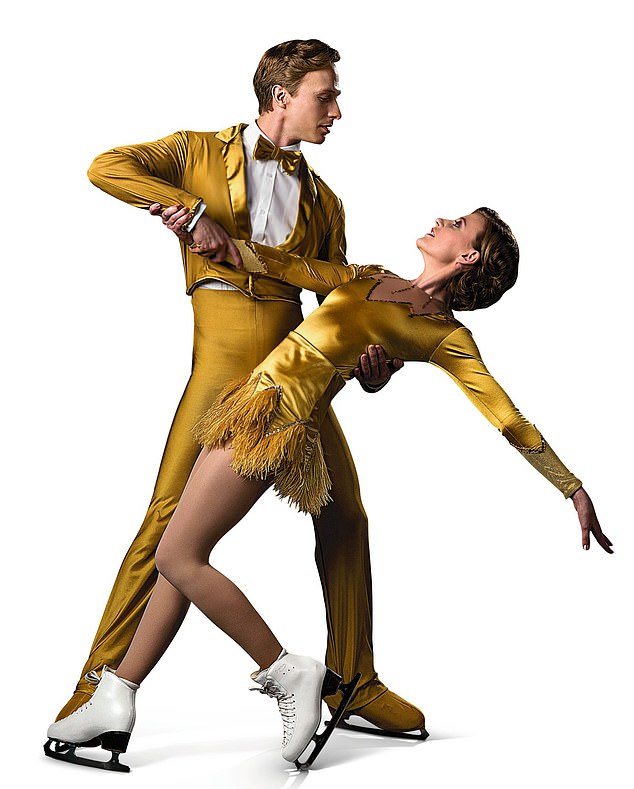 They’ve been skating together for 43 years and the drama will reveal some of the secrets of their success, such as the barely perceptible hand squeeze just before they took to the ice in Sarajevo in front of a UK TV audience of 24 million, a moment that brought tears to their eyes when they saw it in the film.

‘It was very emotional, but we’ve always done that,’ says Chris.

‘It’s a confirmation and reassurance we gave each other just to say, “I’m here for you.” It’s a private thing.’

The pair grew up almost side by side in Nottingham, but it was Jayne who got the ice skating bug first after a school trip to Nottingham ice rink.

‘Afterwards, I pestered my parents for private lessons, which was a big deal as they were so expensive.

‘I only had one lesson a week for about a year,’ recalls Jayne, now 61.

‘I started when my stepmother suggested I take up skating because she’d done it as a teenager,’ says Chris, 60.

‘I was a country bumpkin from a village near Nottingham, so although I got a pair of new skates for Christmas I had to walk around the house in them for two weeks before I got near the ice.

‘I do remember walking into the rink in Nottingham for the first time.

‘It was magical, with an amazing mural in the foyer of skaters in 1950s Davos flying round the ice in woolly jumpers.’

‘They were doing a stag jump,’ says Jayne, and the rink has been perfectly re-created in Belfast for the ITV drama.

‘She was very glamorous and always wore make-up,’ recalls Jayne.

‘When she used to demonstrate arabesques, her leg went right up in the air. I thought she was amazing.’

But it was ice dance teacher Janet Sawbridge who paired Chris and Jayne together as teenagers, after Chris’s skating partner Sandra Elson went to London.

In the drama, Janet is played by Jaime Winstone, who’s decked out in a striped vintage tracksuit and mustard jumper on the set today.

‘I grew up near the Alexandra Palace rink in north London where I skated to loud garage music,’ she recalls.

‘But I was nervous when the cameras were there and all of a sudden I’m skating with ice champion Penny Coomes, Poppy’s body double.

‘I thought, “Oh my God, this is serious!” It knocked the wind out of my sails.

‘But when I got into character, with Janet’s vintage tracksuits and curled hair, it all clicked and I was quite good.’ 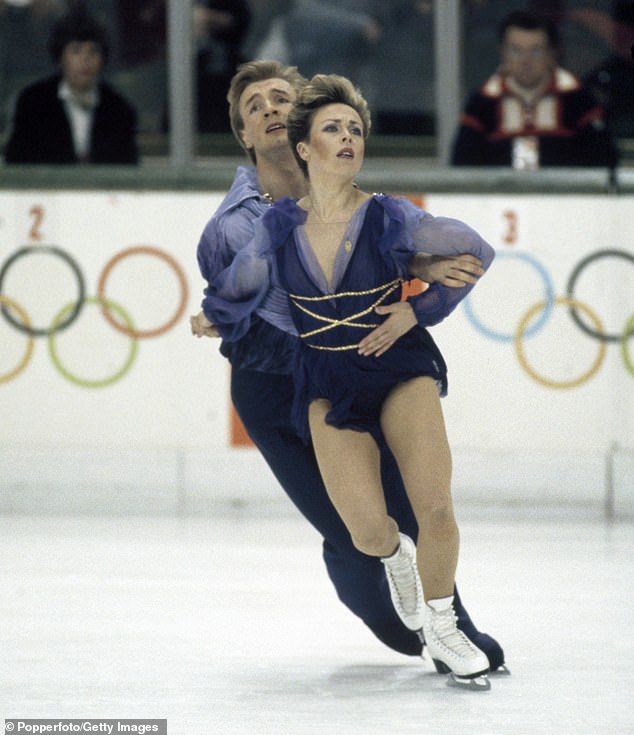 Torvill and Dean have described how Janet made them hold each other in a ballroom dance position, bodies pressed together, to find out if they were inhibited about touching each other.

She transformed their body language and set them on the road to stardom.

‘She even did it for free. She worked with Torvill and Dean very closely at a time when they could be moulded and shaped.’

After their first awkward introduction, the chemistry Janet had banked on started to work.

Jayne was shy, but she began to explore her passionate nature through ice dance.

‘I became confident and let myself go,’ she says.

For Chris, it was about channelling the sadness he’d felt from the age of six when his mother Mavis (Christine Bottomley in the drama) suddenly left.

His father had been having an affair with a family friend, Betty, who moved in the day Mavis moved out.

‘My mother left with a suitcase and an hour later Betty arrived,’ he says.

‘I was an only child, a spoilt little boy on my mother’s coat-tails.

‘Then my mum came back to live in the village, and I always worried that if it was found out I’d been seeing her it would create mayhem.

‘So I felt like the person who was responsible for keeping the peace.’

Together, Jayne and Chris became creative revolutionaries, introducing a new style of ice dancing, even bending the rules for the Bolero routine that immortalised them. 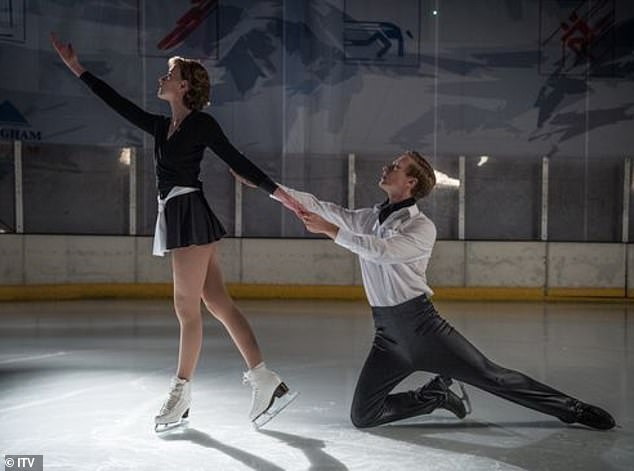 Costume designer Marion McCarthy revealed she went through 15 samples to find the right gold for the outfits worn in the drama. Pictured Poppy and Will on set

The music exceeded the time limit, so they knelt on the ice for the opening bars before skating.

All the beauty of some of their best performances comes through in the drama but it was a challenge filming the skating.

‘The camera could be held and wheeled around the ice.

‘Nick Buckland, our ice champion body double, was great at moving the camera.

‘There was no better person to do it – he knew where the skaters were going so he could be in exactly the right place. He was one of our best bits of equipment!’

‘Bolero was groundbreaking. It broke all the rules,’ she says.

‘The dance was so different, the music was very different, and the costumes were different – less sparkly and more flowing.

‘I went back to the original order book from the London theatrical costume shop. 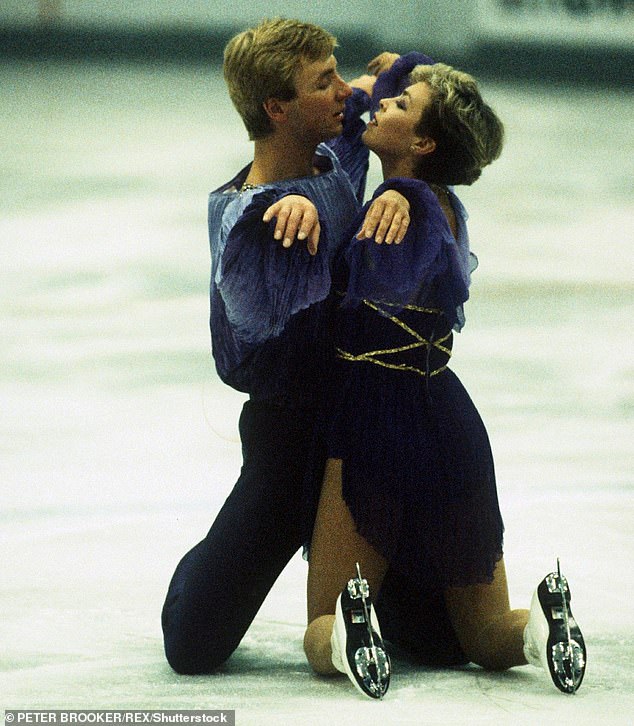 ‘The image of those costumes is so strong in people’s memories that I had to get it right.

‘The hardest thing was matching the colour – purple can look very different under different lights.

‘And the style is an “ombre”, or graduated, dye.

‘We started with a white fabric for Chris’s costume and submerged it in the dye.

‘Then we lifted the top part out so it got the least amount of dye and the bottom got the most, giving that subtle, ethereal effect in the Bolero costumes.’

With the Mack and Mabel costumes, Marion found that that shade of vintage gold wasn’t available any longer.

‘I went through 15 samples to find the right gold.

‘Then we had to work around the feathers on Jayne’s dress, because these costumes were only designed to be on the ice for four minutes, but our actors could be in them for four days and you can’t sit down in a feathered skirt.

‘So instead of a one-piece, we made it a two-piece so Poppy and Penny could take the bottom off and sit down.’

Tune in on Christmas Day, and you may well find yourself giving the whole team a perfect six.