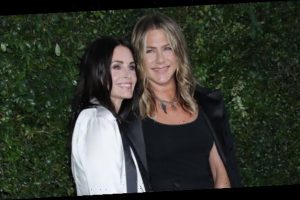 Besties Jennifer Aniston and Courteney Cox were just spotted having dinner together on Friday, Jan. 10 at the exclusive San Vicente Bungalows!

Jennifer Aniston, 50, and Courteney Cox, 55, are seriously BFF #GOALS — and we love how close their bond is. “Jen cherishes her friendship with Courteney, they’ve seen each other through so many seasons, so many ups and downs and proven again and again that they can trust each other,” a source close to Jennifer reveals to HollywoodLife EXCLUSIVELY. “They’ve been best friends for almost thirty years, at this point, there’s really no one Jen is closer to.” Jennifer and Courteney’s friendship dates back to the beginning of Friends back in 1994 — where they also played besties Rachel Green and Monica Gellar — and the pair have only gotten closer over the years!

“They always have each other’s backs and Jen has said many times that she doesn’t know what she’d do with out Courteney in her life. During Jen’s toughest times Courteney has always been there, by her side helping her cope,” the insider adds, referencing the Murder Mystery stars’ 2005 split from Brad Pitt, and subsequent 2018 divorce from Justin Theroux. Courteney also wrote a sweet message after the death of Jen and Justin’s dog Dolly back in July.  “Jen has a lot of friends that she loves dearly, but her bond with Courteney is the deepest, they’re more like sisters than friends, they consider each other family.” Jennifer is also godmother to Courteney’s daughter with David Arquette, 15-year-old Coco, and was supported Court after her 2011 split from David.

The pair are regularly known to hang out together, and were spotted having dinner not once, but twice this week! Jennifer and Courteney looked fabulous as they stepped out for dinner at the members-only San Vicente Bungalow in Los Angeles on Friday, Jan. 12. Jenn kept things casual for the outing in her signature jeans-and-blazer combo with a fabric Chanel flap, and the ladies were later seen leaving the restaurant in the same vehicle. Earlier in the week, Jenn and Courteney dined at Santa Monica’s Giorgio Baldi restaurant alongside mutual friend Jennifer Meyer — who is a jewelry designer — and Tom Hanks‘ wife Rita Wilson.

Since joining Instagram back in October, Jennifer has posted several photos of her with Courteney, including a new post from Sunday, Jan. 12! Joined by buddy Lisa Kudrow, 56, Jenn snuggled up to both for the sweet and candid snaps. “Hi from the girls across the hall 👋🏼,” Jenn sweetly the pictures, which showed the three ladies out together for dinner.