After trips across America, countless drunken nights, and a shocking string of tabloid scandals, the second season of Jersey Shore Family Vacation came to an end on Thursday night. And although the season finale ended on a high note with the roomies partying together at a charity for blood disease, it also included yet another uncomfortable chapter in Ronnie and his baby mama Jen Harley’s rollercoaster relationship. As the season ends, both viewers and the roommates are left wondering about Jen’s home invasion on Jersey Shore Family Vacation. Did it actually happen or are the roommates right to be skeptical? Elite Daily reached out to Ronnie Magro-Ortiz’s team for a comment but did not hear back by the time of publication.

The entirety of Jersey Shore Family Vacation‘s second season has revolved around the various issues in Ronnie’s personal life since Season 1 ended. Over the course of the season, Ronnie’s girlfriend Jen Harley gave birth to their daughter, Ariana Sky, Ronnie and Jen had a nasty fight on social media that ended in a breakup, Jen was arrested, Ronnie and Jen got back together, and finally, the two seemingly broke up again, although their relationship status is not totally clear.

Thursday night’s Season 2 finale added another ripple in the Ronnie and Jen relationship, when Ronnie got a phone call from Jen saying that someone attempted to rob her house while she and Ariana were sleeping. According to Jen, she woke up and saw a man dash out of her home. She noticed her phone was missing and found a box of bullets in her yard. Ronnie immediately decides he should rush home to make sure Jen and Ariana are OK, but the rest of Ronnie’s roommates think the situation sounds phony. So, what’s really going on?

Well, the rest of the house thinks that Jen is making up this home invasion story just to reel Ronnie back in, since he says that he had stopped talking to her after she began sending him pictures of his ex Sammi with her new boyfriend in order to rile him up. Pauly D, Vinny, and Mike point out details from Jen’s story that make it seem fishy: Why would a robber only take a phone? Why would a robber leave a box of bullets behind?

In response to the cast’s skepticism, Jen posted a note on her Instagram story explaining that she did not call Ronnie expecting for it to be broadcast on the show and that she had not talked about the robbery since then. Jen assured viewers that the home invasion was very real and blasted the Jersey Shore Family Vacation cast for calling her a liar. Read Jen’s note below: 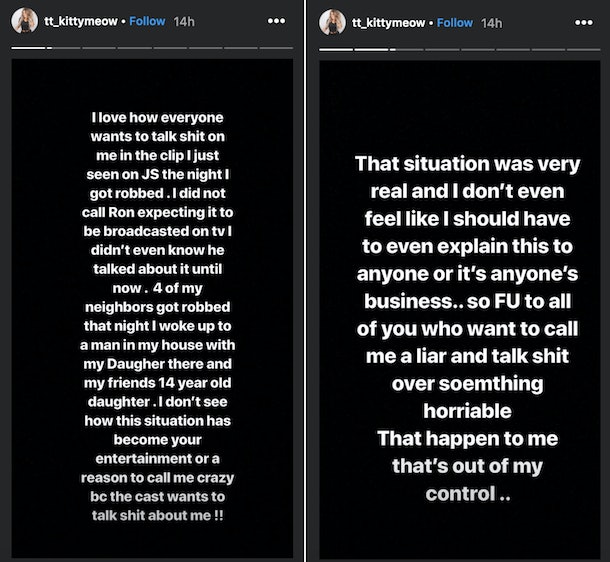 Although it is upsetting to end the season on an uncomfortable note, it also feels fitting. The whole house is still just as worried about Ronnie’s personal life as when the season began.

Thankfully, MTV just picked up Jersey Shore Family Vacation for a third season, so we can get more of the story when Season 3 premieres sometime in 2019.