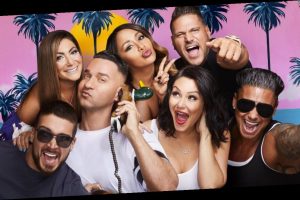 The new season will premiere in November … on a Jerzday.

“Jersey Shore Family Vacation” is coming back next month — and so too is all the drama revolving around Angelina Pivarnick’s disastrous wedding.

MTV confirmed Thursday that the fourth season of the reality series will debut Thursday, November 19th with back-to-back episodes filmed during the pandemic.

“For the first time ever, it’s ‘Jersey Shore ‘Bring the Family’ Vacation’ as our favorite roommates take over an entire resort living their best lives in their own ‘Shore’ bubble,” reads a press release.

Following Jenni “JWOWW” Farley, Deena Nicole Cortese and Nicole “Snooki” Polizzi’s wedding reception speech — which caused the bride to storm out of her own party, before ceasing communication with the other women — the family is “fractured.”

That, according to MTV, prompts Pauly D to take “over a resort and with the help of Mike ‘The Situation’ Sorrentino, Vinny and Ronnie,” where they “hatch a plan to reunite the girls, invite the extended family to distract them from the drama, and hope for the best.”

Of course, this is “Jersey Shore,” so “the best” might not actually happen.

MTV dropped a few text-only promos on Thursday, promising the “biggest vacay in Jerztory” and celebrating the new episodes dropping during the holiday season.

END_OF_DOCUMENT_TOKEN_TO_BE_REPLACED

END_OF_DOCUMENT_TOKEN_TO_BE_REPLACED
We and our partners use cookies on this site to improve our service, perform analytics, personalize advertising, measure advertising performance, and remember website preferences.Ok