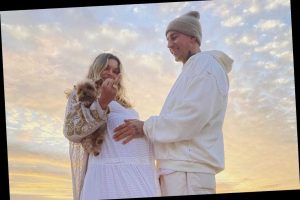 Supermodel Jessica Hart got engaged over the weekend — at her baby shower, Page Six has exclusively learned.

Sources told us that Hart’s beau, James Kirkham, popped the question at the Malibu, Calif., shower, after Hart’s sister, model Ashley Hart, “was giving a blessing for the baby on the beach.”

“Jess and the guests formed a circle, and everyone had their eyes closed. When Jess opened her eyes, James was down on one knee with a vintage ring,” the source added.

We reported last month that the former Victoria’s Secret and Sports Illustrated model Hart, 34, revealed that she was pregnant with the couple’s first child.

END_OF_DOCUMENT_TOKEN_TO_BE_REPLACED

END_OF_DOCUMENT_TOKEN_TO_BE_REPLACED
We and our partners use cookies on this site to improve our service, perform analytics, personalize advertising, measure advertising performance, and remember website preferences.Ok