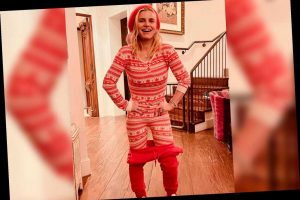 During a time of year when many are indulging in holiday sweets, Jessica Simpson showed off her impressive 100-pound weight loss with a new picture on Christmas Day.

Simpson, who turned 40 earlier this year, flaunted her fit frame in a holiday-inspired red-and-white onesie shared to her Instagram.

Simpson laughs in the photo, which shows her red sweatpants had fallen to her knees. The longsleeve onesie hugs her smaller frame. She’s also wearing a matching wool hat.

“So I thought Eric [Johnson] was taking a photo from the waist up…,” Simpson captioned the pic.

“We all wanna know how did you get so skinny ???” one fan reacted.

Another agreed. “I need to do what she’s doing. Help!”

“How do you stay so thin? You look great,” one of her followers also chimed in.

The singer-turned-fashion-designer flaunted her weight loss throughout the year. Her personal trainer Harley Pasternak told E! News earlier this year that he credited her toned legs to getting in 14,000 steps a day and full-body workouts.

“We slowly ramped those up; we started really easy and slowly increased them,” Pasternak said of the fitness regimen. “We started with doing a full-body workout, one set of each exercise, not really doing too much intensity per body part and gradually increasing the volume and intensity. Focusing on a few muscle groups per day. Different muscles each day of the week.”

Simpson’s health journey has her feeling like she did before she had kids, Pasternak said. “[She’s] in control of everything and [has] such a great attitude of not beating herself up if she doesn’t eat perfectly every day.”

In a post from October, Simpson shared a photo on her business account in which she showed off her toned abs while wearing a black sports bra, which featured a keyhole in front, and high-waisted leggings.

She told People magazine that chasing her kids around “all day, every day” helped keep her in shape.

“I also have the most active husband ever,” she said. “If you marry an athlete, you got to stay on your feet.”

END_OF_DOCUMENT_TOKEN_TO_BE_REPLACED

END_OF_DOCUMENT_TOKEN_TO_BE_REPLACED
We and our partners use cookies on this site to improve our service, perform analytics, personalize advertising, measure advertising performance, and remember website preferences.Ok