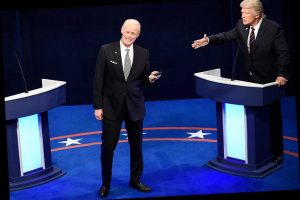 Why Adele’s ‘SNL’ skit about African tourism is under fire

Jim Carrey has been impeached.

The comedian will no longer play President-elect Joe Biden on “Saturday Night Live.”

“Though my term was only meant to be 6 weeks, I was thrilled to be elected as your SNL President…comedy’s highest call of duty,” Carrey tweeted on Saturday. “I would love to go forward knowing that Biden was the victor because I nailed that s–t. But I am just one in a long line of proud, fighting SNL Bidens!”

The 58-year-old LA resident temporarily moved to New York to play Biden on the long-running sketch comedy show, according to The Wrap.

“SNL” has sporadically aired live, in-studio episodes during season 46, despite the pandemic.

“Thank you to Jim Carrey for showing up when it mattered,” the “SNL” Twitter account posted in response to Carrey’s news.

A new Biden may be seen on tonight’s show, which airs at 11:30 p.m. Kristin Wiig will host with Dua Lipa as the musical guest.

During the Obama administration, Jason Sudeikis portrayed Biden. Woody Harrelson and John Mulaney have also played the soon-to-be prez, though only when they’ve hosted the show.

Alec Baldwin, who has played President Trump for years, said goodbye to the character after Trump lost the election.

END_OF_DOCUMENT_TOKEN_TO_BE_REPLACED

END_OF_DOCUMENT_TOKEN_TO_BE_REPLACED
We and our partners use cookies on this site to improve our service, perform analytics, personalize advertising, measure advertising performance, and remember website preferences.Ok