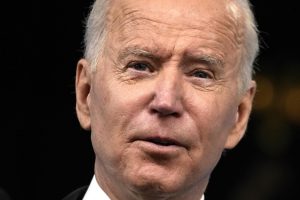 He was meant to be speaking at an MSNBC town hall addressing the country’s immunization efforts. The show was even titled “Vaccinating America.” But with the news cycle’s attention drawn to the goings-on within the Republican House caucus involving Minority Leader Kevin McCarthy and former GOP Conference Chair Liz Cheney, it behooved moderator Lawrence O’Donnell to bring up the issue of bipartisanship, and how trustworthy McCarthy would be, since he had expelled Cheney after saying he supported her just weeks before. “How can you accept whatever someone like Kevin McCarthy says today as something that you’re actually going to legislate a few weeks from now or months from now?” McDonnell asked.

The president indicated that no bipartisan deal had in fact, been reached between the White House and the GOP. “We’re nowhere near having made a deal. We agree that we should try to get a bipartisan agreement. But the Liz Cheney/McCarthy thing is above my pay grade. I mean, I have enough trouble figuring out my own party all the time, let alone the Republicans,” Biden said.

Social media appeared divided by the off-the-cuff comment, and said so on social media. “He could’ve just said “If you want to talk about internal Republican issues, go ask some Republicans”, but “above my pay grade” is weaksauce, especially coming from the highest paid government official,” a user tweeted.

But others decoded the words as Biden’s way of refusing to comment about the Republican Party and what, really, is an internal matter. One social media user said: “There’s something oddly hilarious about POTUS saying something is above his pay grade.” Another even surmised that the comment was “something my mom would say. ‘I don’t know what’s going on with those other kids, I can barely control you two.’ Hahahah.”

To those that felt the President was being too glib, a fourth member of the Twitterati had this to say: “Relax people. That was President Biden’s way of politely saying he is not gonna get involved in the Republican squabbles.. Personally I would have preferred he paraphrase MC Hammer. I can’t touch that.”