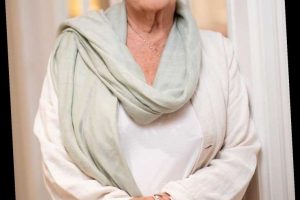 Dame Judi Dench will go to great lengths for her pets.

In a recent episode of the How to Wow podcast, the Academy Award-winning actress, 85, opened up about once giving her pet goldfish mouth-to-mouth resuscitation.

“This is the first time in my life I haven’t got a cat, a dog, and my goldfish died,” she said. “It’s a very sad story.”

“I gave it the kiss of life. It died when it was a very, very little goldfish,” she added, noting that fortunately not only did the fish end up surviving, but that it also grew to be “about six inches long.”

Dench also talked about her heroic intervention back in 2012.

While discussing her love of animals during an appearance on The Graham Norton Show, the actress shared that at the time she was a proud owner of four cats, one dog, two guinea pigs and two fish — “one of which I gave the breath of life to when he was dying.”

As for how she knew her pet was in trouble, Dench explained matter-of-factly that she saw him floating upside down at the top of the tank. “I blew in his mouth,” she continued. “I know I shouldn’t have done because he’s got gills.”

In a cheeky update two years later, Dench told the talk show host that her “famous fish” was “still alive as far as I know” although she jokingly added that she hadn’t been home for a day.

“This is Lazarus the fish,” asked Norton. “He’s still alive?”

The actress went on to share another facet of the story, explaining that after seeing her pet floating on the water, she took him out of the tank — and before giving him mouth-to-mouth she “suddenly saw a little flicker.”

END_OF_DOCUMENT_TOKEN_TO_BE_REPLACED

END_OF_DOCUMENT_TOKEN_TO_BE_REPLACED
We and our partners use cookies on this site to improve our service, perform analytics, personalize advertising, measure advertising performance, and remember website preferences.Ok