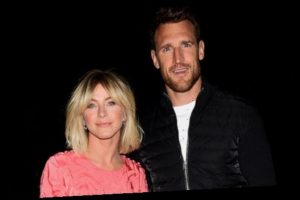 Julianne Hough and Brooks Laich recently gave fans a hint that they reunited in Idaho when they shared similar posts about his dog Koda and now we’re learning they’ve been trying to ‘make their marriage work’.

Julianne Hough, 32, and husband Brooks Laich, 37, are spending time together again in Idaho after parting ways in May, according to a number of sources, and are both enjoying the experience. “Brooks and Julianne are staying on Lake Coeur d’ Alene and are in a really good place right now,” one source EXCLUSIVELY told HollywoodLife. “They’re not putting any labels on where they stand, which is giving Julianne the freedom to explore where she sees their relationship going. Brooks would love to see them officially reconcile, but he’s not putting any pressure on her and would never want her to be unhappy. They’ve both been really happy and positive, and are having an amazing time on their trip.”

Julianne and Brooks haven’t confirmed their reunion yet but fans put two and two together when they both took to Instagram on Sept. 25 and 26th to share similar posts that showed off Brooks’ husky dog, Koda, indicating they were in the same place at the same time. Julianne’s post included a photo and video of herself with Koda in a car, which can be seen below, and she captioned it with, “This sweet boy loves his momma 😭🐺.”

This sweet boy loves his momma 😭🐺

END_OF_DOCUMENT_TOKEN_TO_BE_REPLACED

END_OF_DOCUMENT_TOKEN_TO_BE_REPLACED
We and our partners use cookies on this site to improve our service, perform analytics, personalize advertising, measure advertising performance, and remember website preferences.Ok