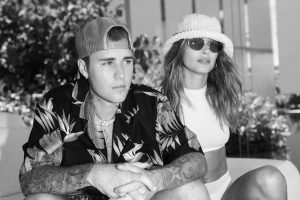 Justin Bieber drops over $1,000 on weed and edibles in one go

Hailey Baldwin all tied up in strappy $2K dress

Is a baby Bieber on the way?

Justin Bieber shared a photo with his wife, Hailey Baldwin, with a caption that prompted fans to speculate the couple are expecting.

In the picture, the “Baby” singer is seen sitting beside the model, 24, as they both look out into the distance. He rocks swim trunks, a tropical-print button-down shirt and a trucker hat, while she wears a bikini that shows her toned stomach.

Fans immediately took notice of the photo’s caption and wondered whether Bieber was implying he and Baldwin are going to be parents.

“Wait what? MOM AND DAD?!” one person commented.

“Baby on the way?” another fan asked.

“What!? Is there a baby coming? The Bieber family is growing!!!!!” a third user added.

“Omg, I dreamed that she was pregnant those past days I hope she’s pregnant,” wrote one more.

Others, however, surmised that Baldwin likely does not have a baby on board.

“I doubt that. Hailey wants to do a lot in her career and Justin has a while tour coming up,” a fan noted.

“I don’t think. He said he wants to wait until tour life is over before he has kids with her,” another agreed.

“She literally said herself that she is not ready to have kids,” a netizen added.

While neither Bieber nor Baldwin responded to speculation, the “Drop the Mic” co-host has not been shy about showing off her stomach, posting several photos Monday that showed off her sculpted abs.

The couple, who married in September 2018, previously sparked pregnancy rumors in April 2019 when the Grammy winner posted a photo of Baldwin at a doctor’s office. However, they later revealed it was an April Fools’ Day prank, much to the chagrin of women who have struggled with infertility.

Reps for Bieber and Baldwin did not immediately respond to our requests for comment.