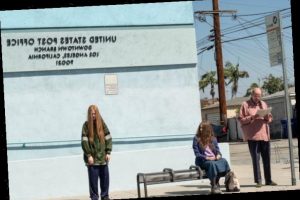 The world is a weird place. Miranda July knows that, but the rest of us sometimes forget. Or maybe we just don’t want to admit how bizarre it is that society more or less agrees that back rubs and hot tubs and flavored chips and McRibs are an appropriate reward for a bazillion years of human development. It’s not until you visit a foreign country, or watch a foreigner trying to make sense of your own, that it starts to register just how weird it all is. That’s what artists do: Like Martian anthropologists, they see things differently, and they reflect them back to us in such a way that we can, too.

With “Kajillionaire,” July devises a fresh strategy to offer an outsider’s perspective, focusing on 26-years-young Old Dolio (Evan Rachel Wood), the oddly-named daughter in a family of scammers — a dysfunctional “scamily,” if ever there was one. A metaphor for home schooling gone horribly wrong, Old Dolio has been raised so far outside the acceptable mold of American parenting that it was all bound to backfire one day. Now, over the course of two eventful weeks, Old Dolio slow-motion short-circuits, finally expressing the desire to experience all that she’s been denied.

That description is completely inadequate, emphasizing plot over the truly unorthodox inner journey July puts Wood’s character through, but if it’s enough to get you in the door, then maybe this label-defying movie can work its magic. It would probably be safer to pitch “Kajillionaire” as an original riff on the tried-and-true con-job genre. Every day, the Dynes — Robert (Richard Jenkins) and Theresa (Debra Winger), with Old Dolio in tow — pull from a playbook of small-time hustles, designed to make a quick buck at other people’s expense.

The opportunistic L.A. trio live in a low-rent office building next door to a bubble factory, where it’s incumbent on them to clear giant clouds of pink foam that leak in through the ceiling several times a day (for the record, the movie isn’t nearly as quirky as that detail makes it sound). As a kind of existential commentary, this absurdist chore could be a variation on the nonstop stream of sand that floods the house in “Woman in the Dunes,” or maybe it’s just a quirky idea July had one day.

As in “Me and You and Everyone We Know” — where July also explored the universal human craving for connection — the wryly observant storyteller embraces a sense of everyday eccentricity, while keeping her film’s feet firmly on the ground. Sure, the tone is unusual: neutral for a time, as July entrusts composer Emile Mosseri (“The Last Black Man in San Francisco”) to carbonate the cocktail. But frequent surprises aside, it’s never too far out-there for audiences to relate. Think Todd Solondz without all the rape jokes. There’s also a queer twist most people won’t see coming, distracted as they’re sure to be by the family’s criminal shenanigans.

From the vantage of a law-abiding citizen like yourself, the Dynes’ pathetic schemes will probably seem like more work than a real job would require. For instance, when Old Dolio wins three round-trip tickets to New York, the family jet there and back just to claim that one of their suitcases went missing in transit, angling to collect $1,575 in lost-bag insurance. (Heck, it beats throwing themselves in front of cars, as in Oshima’s “Boy,” or hawking Bibles to widows, à la “Paper Moon,” a movie that “Kajillionaire” kinda-sorta resembles.)

On the flight home, they meet Melanie (Gina Rodriguez). If small talk were an Olympic sport, she’d have three gold medals. Melanie is what you might call a “credulous” person. She wants to believe, but then, most people do — except for the Dynes, of course. As grifters, they’re so committed to misleading others that they’ve lost the capacity to trust. It’s a sad thing, such cynicism, but it’s all that Old Dolio’s ever known. Determined not to be “false, fakey people” to their own child, these two clearly-unfit parents deprived their daughter of a “normal childhood” — as if such thing even exists.

July understands that most of us measure our upbringing against some Platonic ideal of how we think others were raised. When the gap is great enough, there can be enormous resentment, which many spend their adult lives over-compensating to correct. It’s a normal part of human development for offspring to declare their independence, defining their identities in opposition to the people that raised them. Old Dolio’s going through a version of that process in “Kajillionaire,” even if July’s script never comes right out and identifies that theme.

At Cinefile Video in Los Angeles, the staff have filed July’s previous feature, 2011’s “The Future,” in their “Coming of Age” section. Not the obvious choice, but where would you put it? Turns out, “Kajillionaire” is an unconventional coming-of-age story, too, though it has enough of a crime-movie dimension to amuse those unenthused by July’s more poetic subtext. After hitting it off with the Dynes on the plane, Melanie casually inserts herself into their midst, proposing a creative scheme of her own. She works a demoralizing mall job, where the elderly customers routinely invite her into their homes. Her idea: take them up on the offer, and look for potentially valuable antiques that they could steal and re-sell.

Far-fetched as it sounds, that plan is actually less strange than the one that inspired July’s “It Chooses You,” a book-length photo essay in which the artist (film is just one of the ways July expresses herself) visited folks who’d listed unusual items for sale in the PennySaver classifieds. In “Kajillionaire,” the characters make two such house calls. The first is funny, but the second comes from a far deeper place. A lonely old man lies in bed, awaiting death. To humor him (while buying time to find his checkbook), Melanie and her new friends noisily pretend to be a normal family.

There’s that word again: “normal.” Most of us will never know how others live, but Old Dolio has been starting to wonder, and this act of entering strangers’ homes — of judging their decorating choices and rooting through their things — underscores what’s been missing from her experience. (Props to production designer Sam Lisenco for making these spaces seem so plausible.) Interacting with the old man triggers something in Old Dolio. It’s the point in this consistently unpredictable drama when she begins to reject her upbringing.

There are other contributing factors — a “Positive Parenting” class, a series of small earthquakes, along with feelings for Melanie she can’t quite explain — that force Old Dolio out of the nest. In her own words, the poor gal “doesn’t know anything about tender feelings.” And when it comes to reversing the brainwashing (she’s like a victim of Stockholm syndrome), she hardly knows where to begin. It all builds, in a wonderfully roundabout way, to one of the great romances in cinema history — although maybe only us weirdos who identify as Miranda July fans will recognize it as such.

Knowing her work may help to appreciate Wood’s performance. The “Thirteen” star channels the childlike monotone July uses in her one-woman shows, masking Old Dolio’s emotions for much of the film. Rodridguez is the real revelation here, serving as the first person who’s ever really “seen” Old Dolio. Her character understands that the Dynes are dishonest, but she allows herself to be cautiously vulnerable all the same, enabling her new friend to find herself. In the end, “Kajillionaire” is less about the con than it is the connection, and we’re all the richer as a result.