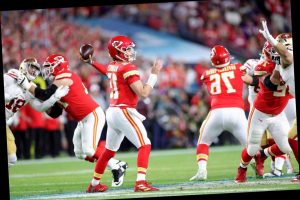 The Kansas City Chiefs are dealing with COVID-19 ahead of the 2021 Super Bowl.

According to ESPN, the Chiefs have placed wide receiver Demarcus Robinson and center Daniel Kilgore on the COVID-19 reserve list after both players came into contact with the virus over the weekend.

"The NFL has done a great job with it, presenting different safety things for the players to stay as safe as possible," Chiefs coach Andy Reid told ESPN. "We've been hammering this point home forever. The problem is you're fighting the invisible man. It just gets you when least expected, and we're seeing that in everything. It's an unfortunate thing."

"These guys were being as safe as they could be," Reid added of Robinson and Kilgore, "and we'll just see how it goes. But the league has built-in rules and regulations, so we follow those, and it'll all work out. It'll all work out for them when it's all said and done." RELATED: How the 2021 Super Bowl Will Be Different Because of the COVID-19 Pandemic

Sources told NFL.com that a barber who recently cut both players' hair had tested positive.

According to the report, the barber was tested for five consecutive days before he was allowed into the Chiefs' facility to cut Robinson and Kilgore's hair, and each test came back negative. However, a rapid test taken on Sunday came back positive after he came in contact with both players.

Robinson and Kilgore reportedly wore masks during their encounter with the barber, who also wore double PPE. Fans could still see Robinson and Kilgore play against the Tampa Bay Buccaneers in Sunday night's Super Bowl LV, as long as the players test negative every day for the next five days.

They both tested negative during Tuesday's round of tests, NFL.com reported.

Robinson and Kilgore are considered backups for the team, according to USA Today's Chiefs Wire. The outlet added that they likely learned most of the game plan last week, so missing practice this week shouldn't pose an issue for the team if they're approved to play on Sunday.

Kilgore has appeared in seven games throughout the season and started four times. Meanwhile, Robinson played in every game this season, with 45 catches, 466 yards and three touchdowns.

The Buccaneers and the Chiefs will face off at Super Bowl LV on Sunday, Feb. 7, in Tampa, Florida. The game will air on CBS at 6:30 p.m. EST.