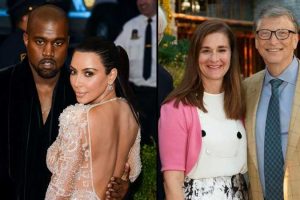 When it comes to million dollar divorces, there is a lot of gossip to go around, making the split a topic of discussion almost everywhere. This is the case even if the divorces are amicable and short. However, if the conflict is turbulent, even getting the best lawyers involved sometimes fails to shield it from the public eye. When its a famous personality who happens to be ultra rich becoming estranged from a spouse, folks are rather keen to know the details about the separation.

While an adored couple breaking up may be an eyesore that fans could take some time to deal with, it can also become intrusive at some level for the couple with constant questioning from the media. However, in many cases, several personalities manage to use this attention to their advantage.

Kanye West and Kim Kardashian were certainly a power couple with their collective wealth hitting the billions. The former duo still receives equal attention from the media even post-divorce and are still making headlines together. For instance, the media covered news like Kanye unfollowing Kim as well as her family on social media platforms which was potent enough to go viral, getting fans worked up in the process. Kanye still follows Kim on Instagram and they have tried their best to make it look like they are on good terms after the divorce. Kanye has however moved on and was reported to have been dating the model Irina Shayk.

RELATED: Keeping Up: The Most Successful Kardashian-Jenner Companies

On the other hand, Kim hired the divorce attorney Laura Wasser to look into how the luxury estates of the former couple like the Calabasas mansion, Wyoming ranch, Miami condominium, and so on would be split up. The splitting of assets also applied to $5 million worth of art, $4 million worth of supercars, $3.2 million worth of jewelry and fashion items, and $300,000 worth of livestock.

The divorce of Bill and Melinda Gates became breaking news owing to the fact that they are amongst some of the wealthiest folks in the world. Plus, breaking up after 27 years of their marriage was bound to storm the internet. The ex-couple announced the news of their mega-divorce on the 3rd of May, 2021.

Their collective fortune, worth a massive $148 billion, was split up between the two after the divorce. About $3 billion worth of wealth was also transferred to Melinda from the BMGI (Bill and Melinda Gates Investments) also known as “The Cascade Investment”. Besides receiving shares worth $130 million of the Mexican distributor Coca-Cola Femsa, she also got about $800 million worth of 2.25 million shares of Deere and Co.out of the divorce. Although they have mutually agreed to the fact that their marriage is irretrievably broken, the duo shall parent their 3 kids and work together at their charitable foundation worth $40 billion which caters to the needs of the underprivileged section of society.

Jeff Bezos is another top tier billionaire who has often been the richest man in the world. After staying married for 25 years, Jeff and MacKenzie finally called it quits in 2019; the same year it was officially announced on Twitter. An important aspect of this divorce that fans liked to hear about was the decision to remain friends post-divorce. It is often referred to as ‘the Godzilla of all splits’ when it comes to the splitting of assets.

This divorce also made MacKenzie the third richest woman in the world that year. Per the settlement she received a 4 percent stake in from Amazon itself which amounted to an astounding $38 billion. Jeff Bezos however held on to Blue Origin and the Washington Post.

Even before getting married and divorced twice with Talulah Riley, Elon Musk was once married to Justine Musk. It is believed that Justine was not very happy with the trial as she is termed as the ‘starter wife’ of Elon. What attracted more attention in the media however was Musk’s second marriage that went through separation twice.

Elon Musk has been one of the richest men in the world and is the owner of one of several successful tech companies. He is the founder and CEO of Tesla and SpaceX among others. When Musk went through three divorces, the splitting of assets became an important concern. Reportedly he had to pay Justine about $170,000 as a monthly legal bill and another $20,000 for household expenses. On the other hand, the matter was settled with Riley with about $20 million. Musk is said to be in a hostile relationship with his first wife, but with Riley, things seem to be more peaceful.

Big money divorces become a hot topic almost instantly and folks are keen to know about their post-divorce relationship between the ex-spouses and the splitting of assets. While some public figures make sure they are going for an equally adored relationship after moving on from their exes, it is not always so. For example, the post-divorce relationship of Kanye with Irina is often seen as a power move to remain in the game. On the flipside, it can be a sensitive affair as in the case of Johnny Depp who divorced Amber Heard after the latter filed charges of abuse against him.