Home » Lifestyle » Kate has ‘changed’ since becoming Princess of Wales

Kate has ‘changed’ since becoming Princess of Wales 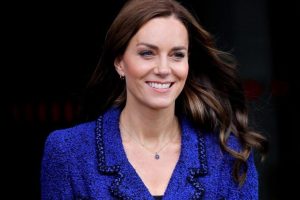 Kate followed in the footsteps of Diana in September when she became the first Princess of Wales since Harry and William’s mother. No easy task, but, according to a body language expert, she has thus far managed well.

Judi James spoke to Express.co.uk about how Princess Kate’s body language has changed in recent weeks.

She said: “Kate’s body language has changed since she became Princess of Wales, but perhaps not in the way that people might have expected.

“The pressure could have caused some signs of anxiety and even imposter syndrome, but instead her confidence signals have been on an upward trajectory recently.

“She is now at something of a peak in terms of sending out signals, which suggests she now not only fully embraces and understands her role, but that she feels comfortable in it, too.”

Judi went on to claim that Kate has moved away from being Williams’ wife to being a “leading” royal in her own right.

She continued: “For years Kate has tended to wear the rather self-limiting body language message that she is a non-royal in a royal role and wife to the future King, but now she seems to understand that she has been totally accepted as a leading royal in her own right.

“She is much more independent, often appearing more confident when she is working alone than with William, and her filmed addresses, speeches and messages are miles from the hesitant and slightly reluctant delivery style that she used to have.”

The body language expert noted that, in this way, Kate is completely different to another senior role whose role has changed since the Queen’s death: Camilla.

She said: “Part of this ‘stepping up’ could be caused by the new Queen’s lack of confidence and a lack of desire to be in the spotlight.

“Camilla is very much her husband’s support act primarily, and she can look uncomfortable when she is in her royal role.

“This might have nudged Kate into the strong position she holds now, both inside and outside the Royal Firm.”

Interestingly, Judi went on to say how the Princess of Wales has become more tactile with her husband in public in recent weeks.

She said: “Something that seems very ‘nouveau-Kate’ is the tendency to become more tactile with her husband in public than less.

“Rising up the ranks to next in line to the throne could have made the always non-tactile and often rather cautious and formal royal couple even more so, but the opposite seems to have applied.

“Recently, we have seen the pair looking far more relaxed and playful together and even quite tactile in public.

“This trait of touch and public displays of affection might have been prompted by the loss of the late Queen.

“She was more traditionally royal and it could be that there had been some small relaxation of the rules since she died.

“Even Charles has been much more openly tactile and affectionate towards Camilla recently.

“Or, it could also be the grief prompted by her death, when mutual support was so vital and there was also more open displays of tears and other emotions of sadness from all the Royal Family.”

Meghan and Harry have also been seen showing affection towards each other in recent weeks – more so than the Waleses. The Sussexes were in fact pictured holding hands when speaking to crowds outside Windsor Castle following the Queen’s death, while Kate and William did not hold hands.