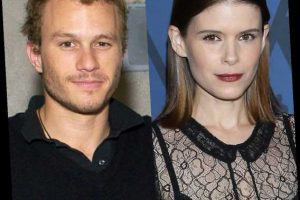 During a recent interview, Kate Mara recalled working with the late Heath Ledger on the set of Brokeback Mountain. Keep scrolling for the touching details.

During a Nov. 12 virtual interview on Watch What Happens Live with Andy Cohen, Kate Mara shared her fondest moment of working with the Oscar nominated actor on 2005's Brokeback Mountain.

"I was 19, he was only a few years older than me, yeah, it was pretty crazy, but he was the sweetest thing," Kate, who played Heath's daughter in the Oscar-winning film, shared. "That whole experience was really amazing. And he, even though he was only a couple years older, he really took me under his wing because I hadn't worked that much. So yeah, it was really special."

The 37-year-old actress continued, "It's so beautiful. And when I auditioned for that I was auditioning just to play that age because I think my character is 19 at that point. But then [the director] Ang Lee decided that he would just use me to play—I think she's like 14 or something early on so he added a couple of those scenes as well. And it was just so, I was like, ‘This is never going to work. We're only, I don't know, five years apart or something.' But Heath was so amazing and he made it work."

Ledger, who passed away in 2008 at the age of 28, welcomed daughter Matilda Ledger with his Brokeback Mountain co-star Michelle Williams in 2005.

The star's impact has long been remembered and honored. Earlier this year, Joaquin Phoenix—who played the iconic role of Joker in the 2019 film of the same name, following Heath's performance of the role in 2008's The Dark Knight—honored the actor during his 2020 SAG Awards speech.

At the end of the oration, he noted, "Really, I'm standing here on the shoulders of my favorite actor, Heath Ledger."

(E! and Bravo are both part of the NBCUniversal family.)