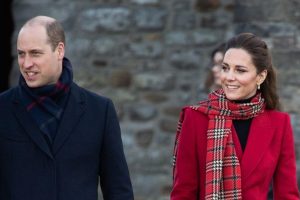 Being a royal involves a lot of time away from home meaning Kate Middleton and Prince William must leave their children each time they attend an engagement.

This week, they visited Wales to mark St David's Day while their three children stayed at home at Apartment 1A Kensington Palace.

Last month, William made his first official visit to Dubai, while Kate spent a few days in Denmark, all while they Prince George, 8, Princess Charlotte, 6, and Prince Louis, 3, remained in the UK.

However, the couple have established a family tradition when it comes to their travel plans to ensure the children still feel happy and secure while their parents are away.

Speaking to a well wisher in Wales, the Duke of Cambridge revealed just how the parents prep the children for their days and nights spent without them.

On Tuesday morning during a royal walkabout in the Welsh town of Abergavenny one of the first questions they were asked by local Liz Brewer was: "How are the children?"

William replied, "The children are very well, thank you."

The local was thrilled to receive such candid information especially after waiting two hours to see the royals in the flesh.

"I told them that we'd been here for two hours, but it was worth it," Brewer told PEOPLE, adding that Kate thanked her.

The couple previously lived in Wales during their engagement and early marriage while the Duke of Cambridge worked at RAF Valley on the island as a helicopter rescue pilot.

Being the place that they started their married life together, the Cambriges regard the home as 'immensely special' and they lived in Anglesey between 2010 and 2013.

The cottage came with access to a private beach and boasts beautiful views of nearby Newborough Forest, Llanddwyn Island and Snowdonia.

William and Kate left Anglesey in 2013, shortly after the birth of Prince George, to take up residence at Kensington Palace.

The couple tend to visit whenever they are in Wales and also like to reconnect with the friends that still live local to their old home.

For updates on all your royal updates, sign up to our daily newsletter here .