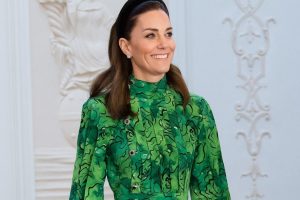 Whether she’spictured wearing a statement power suit or an elegant floral dress, whateverKate Middleton wears is sure to gain attention and have royal fans running to recreate the look for themselves.

And throughout her years as a senior royal, the Duchess of Cambridge, 40, has given fans a glimpse inside her incredible wardrobe and it appears that she has a small selection of designers that she can count on to pull off a royal approved outfit.

One designer who Kate has been spotted wearing a lot recently is Italian-born designer Alessandra Rich whose designs have been worn by the Duchess at events including Royal Ascot and Wimbledon. With A-list fans including Diane Kruger and Sienna Miller, the designer is a firm favourite on the red carpet thanks to Alessandra’s love for feminine designs, delicate details and sophisticated silhouettes.

While most of Kate’s dresses feature long sleeves and hemlines, Alessandra admits that she often includes a “naughty” detail in her designs.

During an interview withThe Telegraph, she said: “All my pieces are like this – they cover the arms or the legs but there’s always a split somewhere or a body chain underneath. It is good to be a bit naughty.”

Although Alessandra may be a fan of adding some cheeky final touches to her pieces, being a royal comes with rules about what they can and can’t wear.

In fact,you’ll never see the Duchess of Cambridge wearing wedges in front of the Queen as it’s thought that Her Majesty isn’t a fan of the summery style of shoe.

According to Vanity Fair, a source said: “The Queen isn’t a fan of wedged shoes. She really doesn’t like them and it’s well known among the women in the family.” However, that’s not to say that rules can’t be rewritten. In the past, it was reported thatthe Queen recommended that ladies in the family avoid wearing trousers wherever they can as it can be deemed unladylike.

But in recent years, both Kate and Meghan Markle have been seen tearing up the rulebook and have been seen wearing numerous tailored styles during their engagements.

Not only has this caused spikes in some of the biggest fashion trends but it's also a way of the young royals bringing the royals into the 21st century.

Elsewhere, royals aren’t allowed to take their coats off in public as this runs the risk of them being pictured undignified.

When they do take their coats off, it must be done out of the eyes of the public so that they can always present themselves looking composed.