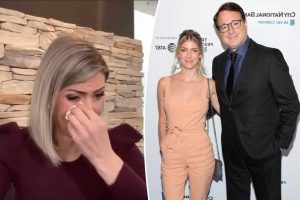 Bob Saget’s widow revealed his final text messages to her before his untimely death.

In her first sit-down TV interview since the “Full House” alum’s passing, Kelly Rizzo told “Today” show’s Hoda Kotb the last messages she has from her husband.

“It was just all love,” a tear-eyed Rizzo shared.

Although Rizzo, who married Saget in October 2018, is grappling with the sudden loss of her late husband, the Eat Travel Rock founder said she’s grateful that they always expressed their love for each other.

Kotb, 57, asked if Saget had been feeling well in the days leading up to his shocking death, and while Rizzo didn’t allude to any physical ailments, she revealed he was struggling with “everything going on in the world.”

“All I’ll say was he was very happy and thrilled to be back out on the road,” she shared. “He was also very sensitive, and just all the weight of everything going on in the world it was just weighing very heavily on him, and that’s why he felt more compelled than ever to make people laugh.”

“He was everyone’s dear friend,” Rizzo added. “No one will ever be like Bob.”

More than 100 of Saget’s closest friends and family members came together for a private funeral service on Jan. 14, and Rizzo revealed that many of the attendees approached her to say they had spoken to the “Fuller House” star as recently as a week before his death.

“I’m like, ‘How did he have the time to talk to everybody and tell everybody that he loved them all the time?’” Rizzo said, joking that must’ve been why the comedian was always on his phone.

“I knew that that’s how it was ‘cause he told me 500 times a day, but there was not one person out there that doubted his love for him.”