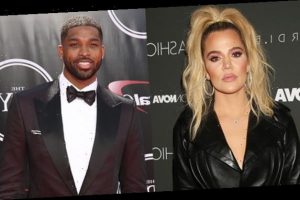 Khloe Kardashian dished about co-parenting 2-year-old True to Andy Cohen in this ‘KUWTK’ bonus scene, noting that she has ‘to be an adult’ in the situation.

Khloe Kardashian, 36, didn’t told back on talking about her relationship with ex Tristan Thompson, 29, while at an event with Andy Cohen back in October. “How’s co-parenting?” the Watch What Happens Live host asked at the re-opening of the Hard Rock Hotel in Hollywood, Florida last fall. “You know what, Tristan and I are in a really good space,” the Good American founder — who shares 2-year-old True with Tristan — replied. Andy noted, “If anyone could get in a good space with him, it’s you.”

“It’s like I have to be an adult. Why make it difficult for myself for the rest of my life? I have to deal with him,” Khloe admitted, referencing past cheating drama with the Cleveland Cavalier player. “He’s [True’s] dad and he’s a great dad to her,” Khloe went on. “So I’m not gonna drag my feet, I’ll make it as good as I can. Because that would just be harder on me. And so, it’s in a really good place. I praise things like that,” she also said.”That’s good!” Andy added, before asking the Keeping Up star for some advice about dealing with publicly posting his adorable son Benjamin Allen, 1.

“Is True on your show?” Andy, who became a father in Feb. 2019 via surrogate, asked Khloe, who confirmed True does appear on Keeping Up With The Kardashians. He explained, “My mom is getting to me. She says I’m posting too much of Ben [on social media]. She’s like, ‘You can’t do this. He didn’t choose this.’ My sister is getting on me. But he’s so cute, I can’t handle it!” It turns out, Khloe has had a similar dilemma with cutie patootie True.

I’m wise enough now to know, you came into my life to show me just what it means to be an incredible person. I appreciate how I am able to learn from and grow because of you. I thank God for the beautiful and loving woman you are to everyone, especially our daughter True. You deserve the world Koko! True and I love you mama. Happy Birthday @khloekardashian ❤️🥳

“When I was pregnant, I was like ‘I’ll never post her’,” Khloe admitted. “Then I had her had her and you’re like, ‘you’re so cute.’ I’m like the Calabasas mom. I’m like the biggest loser. I make homemade bread now,” she joked. Andy quickly corrected her, saying “You are not the biggest loser. You’re the coolest Kardashian!” Also in attendance at the event were Scott Disick, 37, and his then-girlfriend Sofia Richie, 21. “I’m here with Scott, and Sofia — his girlfriend. We’re just a crazy bunch of people that intertwine,” Khloe hilariously said.

While Khloe has denied rumors that she and Tristan are back together — flatly shutting down speculation that they’re engaged — the exes have been spending plenty of time together! Tristan was recently in attendance at her 36th birthday bash, and the pair were also photographed on the 4th of July together. A source told HollywoodLife EXCLUSIVELY this month, “They are getting along better than ever for the sake of True and are just focused on co-parenting. There is no truth to the [engagement] rumors whatsoever.