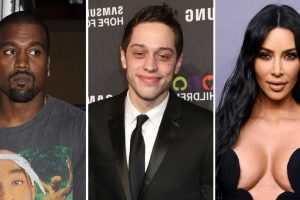 Defending her man. Kim Kardashian is making it clear how she feels about Pete Davidson‘s character after Kanye West released his disturbing “Eazy” music video.

The 41-year-old reality star “liked” a tweet sent by director James Gunn on Thursday, March 3, which read: “For the record, Pete Davidson is one of the nicest, sweetest guys I know. A truly generous, tender & funny spirit, he treats everyone around him with respect.”

The Skims founder, 41, “liked” the tweet one day after the rapper, 44, released an animated music video that showed him kidnapping and beheading the King of Staten Island actor. The song includes the lyric: “God saved me from that crash, just so I could beat Pete Davidson’s ass.”

The Keeping Up With the Kardashians alum filed for divorce from the Grammy winner in February 2021 after nearly seven years of marriage. Earlier this week, a judge declared the beauty mogul legally single and restored her maiden name.

In a separate post, West encouraged followers to yell at Davidson if they encountered him in real life, writing, “IF YOU SEE SKETE IN REAL LIFE SCREAM AT YHE LOOSER AT THE TOP OF YOUR LUNGS AND SAY KIMYE FOREVER 💔.”

Shortly thereafter, the producer shared a text allegedly from Kardashian that read, “U are creating a dangerous and scary environment and someone will hurt Pete and this will all be your fault.” The Chicago native captioned the Instagram post, “UPON MY WIFE’S REQUEST PLEASE NOBODY DO ANYTHING PHYSICAL TO SKETE IM GOING TO HANDLE THE SITUATION MYSELF.”

Though West’s criticism of Davidson hasn’t abated, the New York City native and the reality star haven’t let his statements interfere with their romance. “They’re refusing to let it derail or distract them as a couple,” an insider exclusively told Us Weekly last month. “Kim and Pete are very much excited about what the future holds for them as a couple.”

The source added that the twosome haven’t been “overly public” about their “current status” because of the “Heartless” singer’s behavior. “The current circumstances make it awkward for them to shout their relationship from the rooftops,” the insider explained. “[But Kim] adores Pete [and] they’re spending as much time together as they can.”